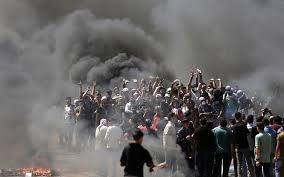 Since Donald Trump’s ascendance onto the national political stage, I’ve occasionally sworn off following the news. Last week, though, I couldn’t help but watch — and watch with utter dismay — an event which was the perfect storm of boorish ignorance buttressed by misplaced self confidence. I cringed for a variety of reasons with which I will now assault you. But first a bit of disclosure.

One of my many conceits is that I consider myself well-read on some subjects. One is the history of the State of Israel from the very beginnings of Zionism in the 19th century to the present. I have read a dozen or so books on the subject and am presently reading a new biography of Golda Meir called Lioness.  One thing you learn when studying this history is that there are no easy remedies for the issues that divide Israelis and Palestinians. It is impossible for me, as neither a Jew nor a Palestinian, to come down firmly on one side or the other. I find the plight of the Palestinians tragic. Yet I believe Israel’s desire to survive as a nation is justified. There simply are no easy answers, and demagogues on both sides exploit the enmity dividing two peoples.

So along comes the 2016 election victory of Trump. He begins by averring that his son-in-law, Jared Kushner, will have a Middle East peace settlement as one of his 10 or so jobs. But he goes further, saying that the task won’t be that hard. He exudes the confidence of the clueless. After more than a year of no progress (surprise!), Trump dusts off a campaign promise — moving the U.S. Embassy from Tel Aviv to Jerusalem — and puts the wheels in motion to make it happen. It’s a great gift to his white evangelical base. For some unfathomable religious reason, they put the embassy move right up there with being pro-life and opposing same sex marriage as keys to their support. In my study of the Bible, I must have missed the part where Jesus weighs in on locating embassies.

However, moving the embassy wasn’t really what set me off; I had expected Trump to do it despite the fact that most of our allies felt it would dim chances of a  peace settlement. Rather, what sent me into a whirlwind of disgust was the inauguration ceremony for the new embassy on May 14.

And now it is time for me to assault you with my reasons, as promised.