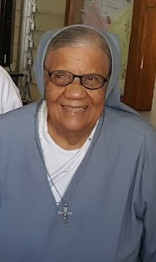 About 20 years ago, I stood on a train platform in Brewster, N.Y., awaiting a train bound for Grand Central Station. Beside me stood a diminutive Haitian nun, about 75 years old, who carried no luggage save a large purse-like bag. She was a dear friend who had been visiting my family. Her final destination that day was Chicago. Her itinerary: Ride the Metro North train to Grand Central (leg one). From Grand Central take a subway to the Port Authority Bus Terminal (leg two). Board a bus to Chicago, a 12-hour, 800-mile overnight haul. This would be a daunting trip for a young person in good health but she was neither. Fretting over the ordeal that lay ahead of her, I offered her some money. She refused it, then opened her bag to assure me that she was well-provisioned for the journey: a few packs of crackers, a banana, a bottle of water, a bus ticket and a token for the subway. Once in Chicago, she’d be met by a former student from Haiti. She told me to give the money to someone who needed it, then stepped onto the train.

That nun was Sister Nicolle Gaillard, my friend of over 55 years. She died on March 10 in her small room at the Provincial House of the Salesian Sisters of Haiti in Port au Prince. She had served the order faithfully for more than 75 years.

During my years of preparation for ordination, one of my assignments was to write a spiritual autobiography. I was to explain why I was choosing to make a life-long, open-ended commitment to the church. I thought this through for some weeks, and discovered that my spirituality was all tied up in my admiration for four women: Anne Close, Tony Dehler, Sister Catherine of the Salesian Sisters of Haiti, and Sister Nicolle.

Anne Close was my mother. Tony Dehler worked for my family, helping bring up my mother and, later, me and my seven siblings. Sister Catherine was the first of the Salesian Sisters who I became close to back in 1969 when I worked in Haiti for a few months. She was my mentor before Sister Nicolle.

These four spiritual role models set examples for me that have stood the test of time. Sister Nicolle was the last one living; thus, I have titled this blog “My Last Hero”.

A better title might have been “My Fourth Hero” because each woman in her own way lives on as a moral compass for me. The end of their earthly journeys in no way diminished their presence in me — a constant prodding presence. It works tirelessly to nudge me forward, inch by inch, toward being a better human being. I could have written about all four today, but that would detract from my focus on Sr. Nicolle, who most recently left us. (I wrote about my mom back in August after she died.)

Sister Nicolle came from a well-off Haitian family. She wasn’t obliged to take vows. She could have lived a comfortable life as an educated Haitian woman outside the convent, according to several of her family members. But the church called her early on. And her devotion to her work — helping the poorest of the poor Haitian children — continued over her lifetime.

Over her 75-year working life, she moved frequently. She would often be sent to some remote corner of Haiti to start a school. These start-ups meant living in very humble quarters — no electricity or running water and dirt floors — while the new school was built. She spent several years living on construction sites, often with a group of orphans who she would take in and care for. She didn’t see her job as burdensome but embraced it with verve and joy. Yes, she was a joyful person.

She also was a radical; animated by a radical love for the poor. One cannot understand her self-denial without understanding that radical love. It led her to vows of poverty, chastity, and obedience. Those vows enabled her to do the work she believed she was put on this earth to do, and do it joyfully.

She also did her work courageously at times. On one occasion she shielded the young Salesian priest, Jean-Bertrand Aristide from an angry, blood-thirsty mob who had come to kill him. He was elected president of Haiti later, in 1990. She also faced down robbers in Cite Soleil, a notorious slum where she lived, with only a crucifix as a weapon. And she was famous for her ability to talk people out of their money. Once when she needed a bus, she talked the Japanese embassy in Port au Prince into giving her a brand new Toyota bus. She had a wide network of former students – her anciennes eleves – with whom she corresponded and tried to visit every few years when she came to the States.

She was a tour de force for her order and for the poorest children in Haiti. She lived for a time with 20 orphans on the site of what is now the Provincial House of the Salesian Sisters. Her “home” was little more than two small rooms — dark and dirty. She lived there for more than a year while the Provincial House was built. She wanted to be on site so that thieves couldn’t come and steal construction materials. A large dog and an armed night watchman were her only adult companions. There were no creature comforts for her and those orphans. She didn’t need any.

The monastic vows of poverty, chastity and obedience seem today to be  anachronistic. Who would make such sacrifices? Not me for sure. So how can I have not one, but two, role models who have taken those vows and lived by them? How can a person who is neither poor, nor chaste, nor particularly obedient even begin to emulate someone who has embraced an opposite mode of life? We probably can’t. We may make some progress toward living like them but it’s so miniscule as to be imperceptible.

I don’t usually go to Biblical references in this blog, but anyone with a cursory knowledge of the Old and New Testaments is familiar with passages that speak to 1) the evils of worshiping mammon (wealth) and the need to make common cause with the poor; 2) the need to put discipleship ahead of family at times; and 3), the need to be obedient. A life like Sr. Nicolle’s proves that leaving possessions, family and freedom to serve a greater cause can actually lead to a happy life.

Sr. Nicolle, over the 55-plus years of our friendship, proved to me the great paradox of the Gospel — that self-sacrificial service to others brings joy that material possessions and personal freedoms cannot match. I know my joy can never match hers because I’ll never measure up to her example. But. . . I still have her example as a guide. I don’t need to wonder about the best way to live. She and my other three spiritual heroes have shown me.

5 mins read in Ranting
Stay Connected!
Get my latest blog posts straight to your inbox!
Your information will never be shared