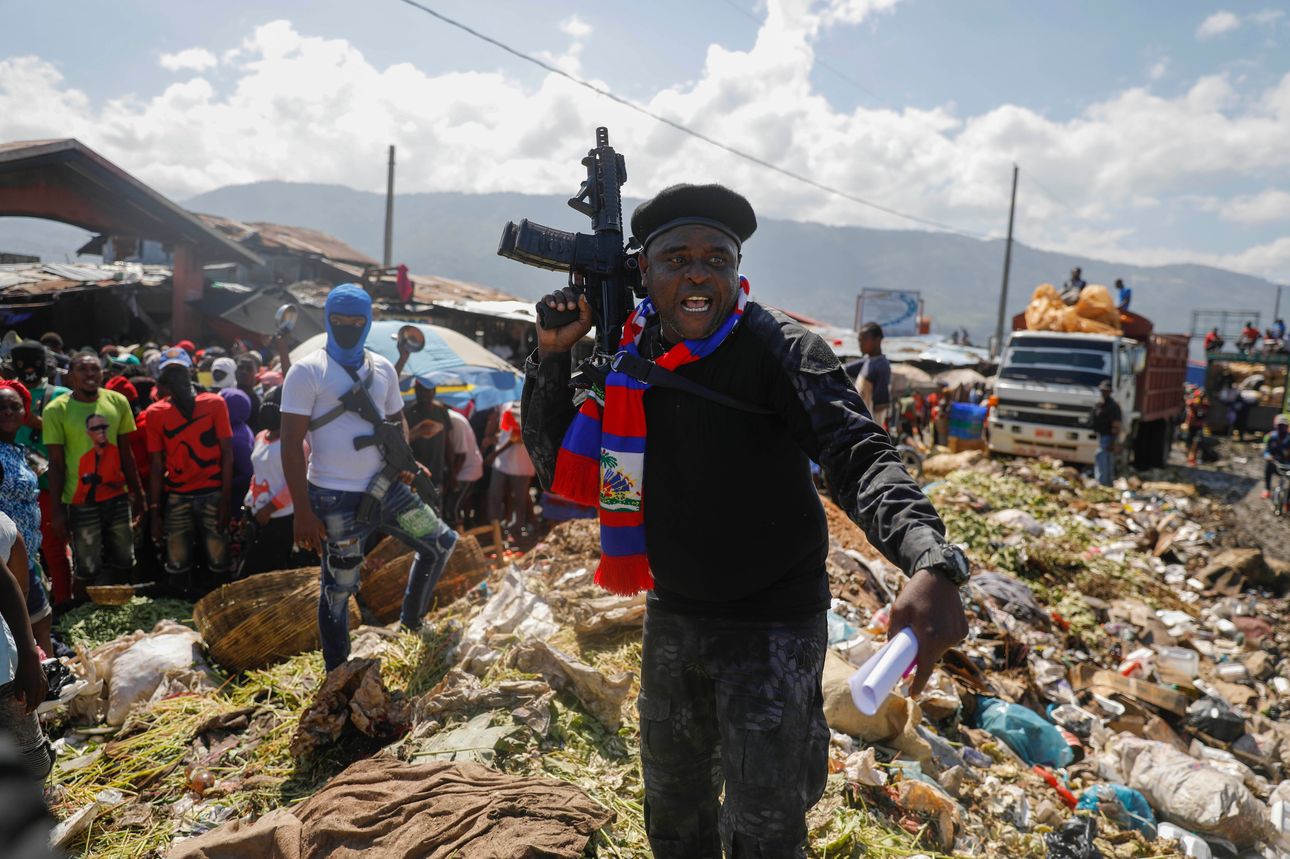 In the winter of 1957, my parents went on a vacation to Haiti. Why Haiti? According to my mother, she’d wanted to go to Africa but the responsibility of raising five young children made such a long trip inadvisable. So she decided on Haiti since it was as much like Africa as she could find close to home. That fateful trip and the movies she brought home to share with us kindled in me a great curiosity about this exotic place just 90 minutes by plane from Miami. By the time I went off to college in 1968, that curiosity, nourished by two summer trips to Haiti, had morphed into something more like infatuation or perhaps love.

So, when the Marine Corps rejected me as a recruit because of my history of seizures, I found myself with a 4F deferment — free to leave college to do whatever in the world I wanted. In January 1969, I borrowed money from my sister Crandall and bought a one-way ticket to Port au Prince on PanAm. I didn’t ask permission. My sole concession to protocol was a phone call to my parents from the airport in New York before my departure. Once in Port au Prince I checked into the same motel I’d stayed in twice before and reported for work at the convent/school of the Salesian Sisters of Haiti in downtown Port au Prince. They were, to put it mildly, a bit surprised by my arrival, but they soon got over their surprise and put me to work. In the mornings I would go to a place called “Brooklyn” — a slum on the outskirts of the city. It is now known as Cite Soleil and is one of the most dangerous places in Haiti. Once there, I would make my way to the little school in the midst of the slum and report to work, doing whatever Father Arthur Volel wanted me to do. One project was to discover how many children in the area were malnourished and catalogue their names and locations. In the afternoon, when school was over in the slum, I would go to the Sisters’ school downtown and teach English to the girls in the upper grades. English was considered essential if one was to get a job in the tourist trade.

Those few months in 1969, before the Duvalier government kicked me out of Haiti, (a story too long to recount here) were formative ones for young man born into Southern white privilege. The experience changed my life because the people I got to know became spiritual role models. Three of them — Sister Catherine, Sister Nicolle, and Father Arthur Volel — remain as saintly figures in my psyche. They gave up every material comfort to live among the poorest of the poor in the poorest place in our hemisphere.  Their incredible self-sacrifice gave them a joy that few have experienced.

[Please note that when I call them role models I do not imply that I was ever capable of following their example. I imagine a continuum between total selfishness and total self-denial. They rest toward the self-denial end of the continuum, I toward the other end. But trying to move myself in tiny, almost imperceptible, steps toward them is my way to honor them and, paradoxically, make myself more joyful. It is what is known as the great paradox of the Gospel.]

I sat down to write this today, All Saints Day 2021, not because of how Haiti changed me but because of the changes I have observed in Haiti since the late 1960s.

Those changes have been profound. In 1929, an explorer and journalist named Willie Seabrook wrote a book entitled The Magic Island. It chronicled his sojourn in Haiti with emphasis on voodoo rituals, zombies, and other other-worldly goings on in Haiti. My mother gave me the book to read back in the ’60s. It very accurately portrayed the Haiti that I initially discovered in the 60’s — a colorful, exotic, mountainous land where gaiety and raw poverty co-existed.

Haiti was also a place with a long and sometimes violent history. No one who has ever been to La Citadelle, the fortress built by King Henri Christophe in the north of Haiti, will ever forget that the fledgling nation of slaves held off the might of Napoleon’s French fleets at the turn of the 19th century. The founders of independent Haiti were heroic and tragic figures. Toussaint L’Ouverture died in a cold French prison and was memorialized by Wordsworth in his poem, To Toussaint L’Ouverture.

Toussaint – the most unhappy of men! –

Whether the rural milkmaid by her cow

Sing in thy hearing, or though liest now

Oh miserable Chieftain, where and when

Wilt thou find patience? Yet die not! Do thou

Wear rather in thy bonds a cheerful brow;

Live, and take comfort! Thou hast left behind

Powers that will work for thee – air, earth, and skies –

There’s not a breathing of the common wind

That will forget thee! Thou hast great allies:

Thy friends are exultations, agonies,

And love, and man’s unconquerable mind.

The lure of Haiti brought writers and artists to the island often during the 1950s and ’60s. Graham Greene wrote The Comedians while staying at the fabled Hotel Oloffson, which housed many foreign writers over the years. Tourism thrived, with visitors traveling to Jacmel and Cap Haitian and buying Haitian art. Club Med even opened a resort up the coast from Port au Prince late in the 80’s.

But this patina of gaiety never elevated the bottom 90 percent of Haitians above grinding and, yes, worsening poverty. As the currency of Haiti — the Gourde — became worth less and less, the cost of everyday necessities increased as wages, for the 30 percent who actually earned wages, stagnated. Since the beginning of this century, the plight of Haitians has worsened steadily. And, as if the lives of Haitians weren’t dismal enough already, glimmers of hope for a better future are less and less likely. My wife Lucy and I have been asked thousands of times, as we have traveled back and forth to Haiti, questions like these.:

The answers: Very bad, bleak, and you can’t.

Haiti has descended into a dystopian darkness unlike anywhere else in the world — brutal, life-threatening poverty overlaid with total lawlessness. Gangs, guns, and drugs took root in the fertile ground of abject poverty and fueled the decline. And, less you think that Haiti is a nation of drug users, I included drugs in the list because Haiti is a convenient transit point for drug smuggling to points north. Haitians don’t have the money to buy recreational drugs.

All Saints’ and All Souls’ Days, used to be a good time to visit Haiti. All sorts of traditions common across Latin America were observed. People flocked to cemeteries, some painted themselves white, resembling zombies, to pay respects to the dead. Lucy visited a cemetery on the Day of the Dead a few years ago and was set upon by one such zombie who fortunately did her no harm. Such a visit now would be far too dangerous even to consider. The  element of fun has left Haiti. All that remains is the unrelenting struggle to survive. During the decades that Lucy and I frequently visited Haiti, working  to make a tiny difference, the experiences produced much conflict within me, especially each time I left the country. I was torn by two emotions — guilt and gratitude. Should I be grateful for all the many material benefits that life in the US afforded or should I be riven with guilt at the unfairness of it all?

One image kept me gripped by guilt.

On a searingly hot afternoon in the early 2000’s I was driving through the outskirts of Port au Prince with a friend, the late Deacon Edgar Hopper of New York. We were on the dustiest of dusty dirt roads. The huts that lined the road were uniformly covered with dust as were the palm fronds and other vegetation. We slowed to a crawl in stop-and-go traffic. Looking out the window I came face to face with a little boy perhaps 4 years old. He was naked and covered with dust. He stared at me; I stared back. In that instant, all I could think of was the life that lay ahead for him.

Haiti’s poverty is not simply the poverty of material surroundings. It is also the poverty of hope. Without hope, without opportunity, young men join violent gangs and take over great swaths of the capital city. They kidnap even the poor for meager ransoms. They kidnap foreigners for better ransoms. They kill their rivals without fear of the law, since there is none.  Without hope, without opportunity, young families risk life and limb to emigrate with almost no chance of success. Many die in the process. But who among us can blame them for trying?

Because of the confluence of recent events in Haiti and the fact that today is All Saints’ Day, I entitled this blog A Requiem for Haiti. Despite that, I am not allowed to give up on Haiti. Women and men like Sisters Catherine and Nicolle and Father Arthur Volel never gave up; so what in the world would give me the right to simply write off Haiti like a bad investment — forgotten. We can pray for miracles and be vigilant for opportunities to give hope.

8 mins read in Climate Change
Stay Connected!
Get my latest blog posts straight to your inbox!
Your information will never be shared