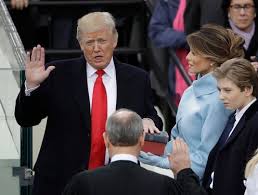 I recently heard from a long-time friend in South Carolina, Mr. Eager Beaver,  a high school civics teacher in the hamlet of Van Wyck. I mentioned to him what a mess I thought the country was in, but I must have said some things he found extreme. Mr. Beaver, shocked to the marrow by some perceived sacrilege, challenged me:  “You, dear friend, need a lesson in civics! I’m teaching a class on oaths of office next week to my 10th grade honors class, and you’re invited — nay, expected — to attend.”  So off to Van Wyck, I went.

Driving into town, I passed an abandoned brick yard overgrown with kudzu, a Discount Guns store, a dilapidated What-a-Burger and a couple of Confederate battle flags. I pulled into Van Wyck High School’s parking lot and walked into the classroom just as the 14 honors students took their seats.

Getting things under way, Mr. B asked each student to stand and recite the presidential oath of office. They did so flawlessly. Then he asked them to recite the oaths required of members of Congress and other US government officials. With just a few slip-ups all 14 complied.

“Good,” said Mr. B. “You’ve mastered one of the great safeguards of our democracy — the oaths of office.”

Then, to the dismay of our glowing Mr. Beaver, a hand shot up from the back row.  Uh-oh: a student whose face and body language telegraphed attitude. It was written all over him — almost a walking smirk.

“What happens if a president violates his oath of office?”  Lee Roy asked.

Mr. B, thankful for a softball question, responded, “Well, in that case the Congress would impeach him.”

“Does that ever happen?” Lee Roy continued.

“Oh, almost never,” replied the still-smiling Beaver. He continued:  “But our people, the electorate, are a demanding lot, and someone who breaks their oath of office wouldn’t last very long in political life. The voters would smell a rat and vote him out.”

Lee Roy pressed on. “Well, that sounds good. But what if some clever charlatan from outside the political world managed to sneak through the electoral process anyway? Would his oath prevent him from doing bad things in public office?”

“For sure, if  he did something unconstitutional,” Mr. B answered a bit impatiently. But Lee Roy, rubbing his chin contemplatively, had more questions.

“And who would enforce that oath, Mr. Beaver?”

“The Congress, of course!” shot back Mr. B, now rattled and worn down.

He sighed deeply and softened his tone, hoping to disarm Lee Roy. “Your scenario is highly unlikely, Lee Roy.  Our electorate is educated and well-informed. They’d never allow such a situation to occur.”

But Lee Roy, unpersuaded, gave no quarter. “What if people in Congress who were in the same party as the president ignored their oaths? What if they put their own interests ahead of the country’s? What if they looked at polls and decided they’d have a better of chance of getting re-elected if voters thought they were buddies with the president, even if they knew in their hearts that the president was immoral, unethical and maybe even a whack job? What then?”

“Lee Roy!” exclaimed Beaver, red-faced. “Have you no faith in how our democracy is supposed to work!?”

Unbowed, Lee Roy volleyed: “And what if he did something really wrong but not specifically forbidden by the Constitution?”

“What on earth are you talking about?” asked Mr. B, now almost shouting

“Well, just for argument’s sake, what if it turned out that a president had dodged the draft?” Lee Roy said. “Or was a liar? Or a business cheat? Or a misogynist? Or an out-and-out narcissist? Or practiced nepotism?  Or was a racist?”

“My God, Lee Roy! What an imagination you have!” Mr. B said dismissively. “The American people, citizens of the world’s greatest country, would never elect a president like that. And besides, if they did the Congress would quickly rise up and impeach him.”

“Then I guess we’ve got nothing to worry about, Mr. B.” Lee Roy said sarcastically. “No way the greatest country on earth could make such a huge mistake.”

With that, the bell rang and the students filed out. Mr. Beaver figured that at least 13 of his pupils learned something.

I do solemnly swear (or affirm) that I will support and defend the Constitution of the United States against all enemies, foreign and domestic; that I will bear true faith and allegiance to the same; that I take this obligation freely, without any mental reservation or purpose of evasion; and that I will well and faithfully discharge the duties of the office on which I am about to enter: So help me God.

Those oaths, respectively, are sworn by our president and members of Congress. They stand before the people who elected them, left hand on the Bible (or another sacred text) and parrot words that have become meaningless! The oaths are part of hollow ceremonies — I say this with extreme sadness tinged with some rage — that are a useless waste of time.

The Trump presidency makes all this abundantly clear, so why do we bother anymore? Let’s just do away with oaths of office.

Too radical a proposal? Too cynical? No, because unless our country turns itself around, they’re nothing but an exercise in hypocrisy.