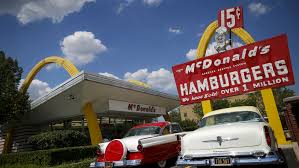 Before I begin exploring the major contribution of McDonald’s Corp. to income inequality in our country, let me mention some things that have crossed my mind recently.

Now let’s turn our attention to the largest food retailer in the world —  the McDonald’s Corp. Some 1.9 million people work for McDonald’s and its franchisees. The vast majority of these employees earn just over the minimum wage set by the state or city where they work. Here are some hourly wages advertised on the website Glassdoor: (www.glassdoor.com):

There are some 36,000 McDonald’s restaurants worldwide. Eighty percent are franchises while the rest are corporately owned. Thus, determining an average wage is tricky. Franchisees are not obligated to publish their wage policies.The corporation announced in 2015 that it aimed to have an average wage of $10 per hour at corporately owned restaurants by the end of 2016. But that isn’t the case for franchisees, which can set their own wages.

Several employment sites I looked at showed that the average wage advertised is about $9.00, if shift managers are included. So, to give McDonald’s and its franchisees the benefit of the doubt, let’s assume $9.25 as an average. I’m fairly certain that unions struggling to organize McDonald’s workers (see www.fightfor15.org) would say that $9.25 is  unrealistically high.

Using $9.25 as an average, however, translates to an  annual salary of $18,500 (50 weeks of 40-hour weeks) That’s well below the poverty line for a four-person household. In fairness, McDonald’s doesn’t deny that its employees need to work two jobs to support a family. But let’s compare salaries paid to line employees to those of McDonald’s executives. The CEO, Mr. Stephen Easterbrook earned $15,355,746 in 2016. His four most highly compensated lieutenants earned on average $4,066,000. Thus, Mr. Easterbrook earned 830 times more than the average McDonald’s line worker while his lieutenants earned 219 times more than burger flippers. Nowhere else but in the good ol’ USA will you  find such discrepancies. What’s more, the corporation squeezes its franchisees by charging them various fees and shared expenses so that the franchisee has little money left over for increasing employee wages. One franchisee who complained about her lack of profitability reportedly was told to cut her employees’ already meager pay. Read about that with the link below.

Is it realistic to expect a CEO who’s paid $15 million a year to make it a priority to pay employees more? Absolutely. All it would take is a directive from his board of directors. Those 11 board members make  an average of $307,460 annually for their service — almost 17 times what the average full-time line worker makes, and the directors work on a very part-time basis. According to McDonald’s proxy statement, they meet nine times a year including the annual meeting — call it a total of 90 hours. So their hourly rate is $3,416, or 369 times that of the average line worker. If McDonald’s board members cared about the plight of these workers, rest assured they would pressure their management team to make changes.

Now, if you’re an unrestrained capitalist, you will immediately say, “That isn’t the job of the board. They exist to maximize returns for shareholders!”

Well, that doesn’t wash if the board and management have any moral grounding or compassion. With an operating profit of almost $8 billion,  McDonald’s can do better. They can do so voluntarily, as Target just did with its announcement of a $15 an hour minimum wage companywide by 2020. Or McDonald’s can be forced into it if their labor force organizes, i.e., a union.

Is it too much to ask, in the name of common decency, for the two leaders of this enterprise — CEO Easterbrook and Board Chair Enrique Hernandez,Jr who earn $5,118 per hour and $7,411 per hour, respectively — to be concerned about people making $9.25 and living in poverty? Couldn’t they make a difference in the lives of their own employees if such were a priority?

What Happens in Las Vegas …..