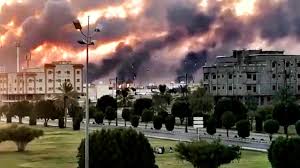 Author’s note 1: This will be the last blog you will receive for a while as I am going to have some mechanical imperfections of my lower spine corrected surgically on October 1st. My sister, Gracie, recently had similar surgery and I got to watch some of her recovery from a ringside seat in New Orleans. That experience and her good advice convinced me not to have great expectations about  when I will want to sit in front of a computer again. So, think of me as your cheerful and quixotic vegetable during the month of October. See you sometime before Thanksgiving?

Author’s note 2:  I wrote this more than a week ago and thought I had scheduled it to publish last week but I hadn’t. That can be attributed to my 69 year old brain. So it is a bit dated in that it was written before the Ukrainian bribery scandal hit. I didn’t intend to bring this up again for fear of being repetitive. But recent events have frustrated me to the point that I’m compelled to sit down and vent. Please bear with me.

I had hoped the firing of John Bolton would lessen the chances of our country embroiling itself in a war with Iran as a proxy for Saudi Arabia. But no. That would underestimate the Trump cabal’s unceasing efforts to distract Americans from the real issue: the moral bankruptcy of this president. My stomach turns at the thought of our president trumpeting how we and our ally Saudi Arabia are protecting “vital American interests and keeping the country safe” by bombing some Shia in Iran.

Just now the BBC (I watch it for perspective from time to time) showed video of our morbidly obese secretary of state, Mike Pompeo, sitting in a gold-gilded chair chatting with Jared Kushner’s best buddy Mohammed bin Salman, the crown prince of the Saudis. This is the amoral beast who ordered the execution of Washington Post journalist Jamal Khashoggi in Turkey. He is reportedly trying to close the book on Khashoggi’s execution as quickly as possible so it doesn’t figure in next year’s presidential campaign. Apparently Pompeo has forgotten about it already. How I long to see Trump try to justify the morality of this alliance on the debate stage!

If you’re one of the wise people who read my blog regularly (dare I say, religiously?) you know that I’ve been warning about a war with Iran for some time. Why have I sounded the alarm? Because war would be good for BUSINESS. Am I being cynical? You bet I am. And so was Dwight D. Eisenhower back in 1961 when he warned us about the danger of the powerful “military-industrial complex”.  Powerful interests with equally powerful political connections would benefit from a war with Iran. They’re the same companies that benefited from the war in Iraq — the domestic oil giants and the arms industry.

These aren’t amorphous entities who operate in the shadows. They are household names — Exxon-Mobil, Chevron, Raytheon and Boeing. Through increases in the price of oil and increases in weapons sales, they and many other firms would see sales and profits rise. Their CEOs would get richer faster, and their boards of directors would see their stock rocket. Through their lobbyists they will support the more hawkish politicians who are fine with sending someone else’s sons and daughters into combat. They will fall all over themselves cozying up and contributing to the sleazy Lindsey Graham, who has advocated military action against Iran for years.

Some of you may say to yourselves, “Wait a minute, Buck, the Iranians started it by bombing Saudi oil facilities.” No, dear reader, that wasn’t the start of this conflict. It started a bit earlier — about 1,300 years earlier, when the Sunni and Shiite split occurred after Mohammed’s death in 632 CE. Much blood has been spilled since then. The United States didn’t even exist when the Sunni/Shiite split marked its 1,000th birthday. So one must see the current Saudi-Iranian conflict in the context of an ancient, blood-soaked feud. What kind of fool would jump into the middle of this 1,300-year-old madness? You guessed it — an acquiescent Republican Party that panders to the elaborately coiffed and artificially tanned Donald Trump. Why would they do this? Because it is good for BUSINESS.

If we go to war with Iran, there will be winners and losers. The winners will be the fossil fuel industry in the U.S. and our arms suppliers. I named some of them above. The losers will be the people of the Middle East and American soldiers who die or are wounded in the service of corporate greed. Innocent Iranians living anywhere near critical facilities will risk incineration by missiles and drones, made in America and launched by an American-Saudi coalition. To appreciate the Saudi’s capacity for revenge at its most virulent, consider the thousands of Yemenis who have perished at the hand of the Saudis and their Raytheon-made missiles.

The U.S., whose huge military and fossil fuel industries are driven by greed, has become a danger to world peace. The metaphor of the bull in the china shop is tempting but vastly understates the scale of damage we do. We aren’t breaking crockery when we sell our killing equipment to the Saudis and Emiratis, we are enabling genocide in Yemen and endangering the entire Middle East with our bellicosity. We are not in any way protecting our country or defending our national interests — unless you define our national interest as corporate profits.

I don’t and I hope you don’t either.

My Southern Education – A Confession