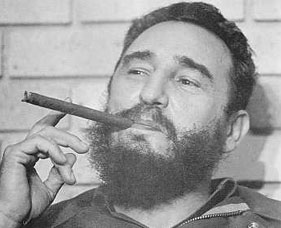 In the spring of 1972, in my senior year at Tulane I took a graduate level seminar in the Latin American Studies department. The requirement for the course was to write a seminar paper of some length about a subject approved by the professor. My subject was US foreign policy toward Cuba. And, oh, how I wish I had saved that paper!

Some 45 years ago my thesis was that US foreign policy was the most important weapon of Fidel Castro’s arsenal in maintaining control of the country. We provided him with a “devil” to blame for all Cuba’s ills. With this Yankee devil to the north he was able to create the kind of fortress mentality to which people were attracted when they were assaulted by a mightier foe from outside. Our policy helped create cohesion within Cuba since we gave them something to hate.

And I proposed a solution to the “problem” of a communist Cuba 90 miles from Florida. Why not love them to death, I proposed. How could the austere workers’ non-paradise of the 70’s, 80’s, and 90’s have withstood a full opening to the decadent capitalist mecca of the north?  Simple answer, it couldn’t have done so.  Of course, our leaders did nothing of the kind since apparently my influence is limited. We embargoed and threatened and sustained the Castros for 45 more years. We did so, in my view, for several reasons. First, there was the almost laughable fear of communism. We couldn’t make friends with communists because they might undermine our democracy – a preposterous and infantile notion. Second, there was and is a very tenacious opposition to any normalization from Little Havana – the Cuban exile community. One can sympathize greatly with them but they should not have veto power over foreign policy. Third, there was the support of the Soviet Union for Cuba. That became pretty irrelevant long before the fall of that empire. The Russians simply couldn’t support Cuba as they had in the past. They didn’t have the money. And finally, in the last 2 decades, we maintained our stupid policy because the Republican base loves it. So senators and representatives from those solid red districts were always going to oppose any appeasement of those “communist dictators” – even if everyone would benefit from such a change.

In true quixotic fashion I have been singing this song of woe to anyone who would listen for the past 45 years. Finally, in 2014, Obama broke the ice and I felt a tiny bit of happiness to see it happen. We didn’t do much. We did not end the economic embargo but, still, change seemed imminent – until today.  This afternoon our lovely President, in the words of the New York Times, “issued a new policy directive that essentially returned the US and Cuba to the adversarial footing that had been in place for more than 50 years before President Obama” announced a normalization of relations.  The picture of the signing ceremony was familiar to all. The President signs with a flourish while a bunch of fawning old white men in dark suits and red ties clap enthusiastically. They are so happy to double down on a 50 year mistake. And I will bet they feel very manly standing up to the ancient Raul Castro.

4 mins read in Quixotic thoughts
Stay Connected!
Get my latest blog posts straight to your inbox!
Your information will never be shared