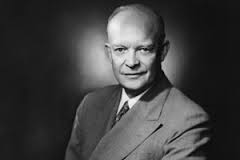 Over 56 years ago in his farewell address, President Dwight David Eisenhower warned the people of the United States about the dangers awaiting because of the vast military-industrial complex that, in his day, had only just begun to really grow. He was prescient and is often given credit, by thinking people, for this prescience. If you google “Eisenhower Military Industrial” you can hear his words and see him speak them on a variety of YouTube videos. You should do that if you never have. Here is a link to the part of the relevant part of the speech. I urge you to spend 2 minutes listening:

I listened to it just now and it made me sad. And, yes, it made me a bit angry and a lot frustrated. Why have we ignored his well publicized warning for 56 years?

Yesterday, I saw video on the news about the Trump cabal in Saudi Arabia. There were Gary Cohn, former Goldman Sachs head, and Rex Tillerson, former Exxon Mobil head, slapping the backs of Saudi royalty in celebration of having sold the Saudis some $150 billion worth of fighter jets. The violence industry was having a field day. And the Trump family was not just along for the ride. No, the crown son-in-law himself, Jared Kushner, had sealed the deal by calling the CEO of Lockheed Martin from Saudi Arabia a few weeks before for a price reduction. What a triumph for the power elite, for the masters of the universe! And what a proof of President Eisenhower’s foresight.

(Now, dear reader, I must state the obvious. When this quixotic deacon uses the names of real individuals (in this case Messrs. Cohn, Tillerson, and Kushner), he is not attempting to demonize those individuals. They are not individually to blame for the morally rudderless ship on which we currently sail. They are merely symptoms of the society in which we live where power and wealth are worshipped without regard to how they were obtained.)

The Book of Micah, sacred to Christians and Jews alike, contains these familiar words,

He has told you, O mortal, what is good; and what does your Lord require of you but to do justice, and to love kindness, and to walk humbly with your God? Micah 6: 8.

You know I have never heard anyone say, “that stupid old Micah got it all wrong!” I have never heard anyone denounce justice or kindness or humility. So why doesn’t our country prize justice and kindness and humility in its government? Your guess is as good as mine. But I might start out thinking about how the wealthy and powerful and their lobbyists have undermined democracy quite effectively. And I might think a little about how unrestrained capitalism has made greed a virtue.

But back to Eisenhower’s warning. There are powerful interests in this country who benefit from perpetual war and benefit greatly from its escalation. They benefit from mindlessly excessive spending on armaments and our military. And, more importantly, they control the reins of government more effectively now than at any time in memory. And remember who benefited from the Iraq war – the defense contractors and the oil industry. We need a few Micahs and Eisenhowers speaking out today. But could they get our attention?