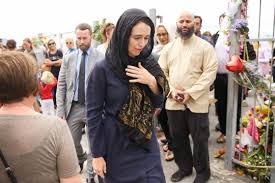 Before I begin……….take a long look at the lady in the title photo above. That is what a political leader looks like. She is wearing a hijab to demonstrate her solidarity with the Muslim community of her country. Which of our political leaders would have the same sensitivity and courage?

How many times have you heard a flag-waving politico-chauvinist end a speech with, “God Bless the United States of America,” as if we’d earned such blessings. You couldn’t blame God if He answered, “Yes, I’ll bless you, but don’t expect Me to rubber stamp your every wayward deed.”

A case in point is what’s happened in New Zealand over the past fortnight. After a heinous, hate-inspired mass shooting at a mosque, New Zealand’s political leaders said “never again,” then set to work to make sure it never did. The country’s swift and meaningful action was a far cry from the “thoughts and prayers” that follow mass shootings in the U.S. How novel.

“My job is to make people feel safe. The idea that people currently do not [feel safe] I find deeply distressing and it’s my job to bring that sense of security back.”

Further, she more than hinted that a part of the response would be a change in the laws governing possession of guns in the country.

“While work is being done as to the chain of events that lead to both the holding of this gun license and the possession of these weapons, I can tell you one thing right now. Our gun laws will change.” Ardern said.

New Zealand’s gun laws were relatively lax compared to other developed countries other than the United States of America. Nevertheless, their last mass shooting (13 killed) was 30 years ago. New Zealanders who wish to own a gun must be 16 years old and pass a criminal background check. However, they are not required to register the weapons. During 2015, New Zealand experienced .17 gun deaths per 100,000 citizens. In the same year the U.S. had 11 gun deaths per 100,000 citizens. That is to say, New Zealand’s rate of gun deaths is roughly 1½ percent of ours.

So the prime minister of a country with much less of a gun problem than ours   — its last mass shooting was 30 years ago and its rate of gun deaths is 1½ percent of ours — reacted to the latest mass shooting assertively, vowing to change the nation’s gun laws. Was she shouted down by her fellow lawmakers? Did the gun manufacturers announce that they would oppose any change to the nation’s gun laws? So far as I can find, the answer to both those questions is “no”. Listen to a opposition politician, a former defense minister, on the subject:

“There is a general recognition that we don’t need these military-style weapons in New Zealand, so it’s very easy to win cross-party support for this.”

— Mark Mitchell, defense minister in the previous, center-right government and supporter of the ban announced by Prime Minister Jacinda Ardern.

Please contrast the response of New Zealand to that of our own benighted country. We have a full-blown gun violence epidemic that dwarfs New Zealand’s gun issues. After we elected a Democratic majority to the House of Representatives last November, it succeeded in passing a universal background check law for gun purchasers. However, it then was sent to the Republican-controlled Senate, where it will die a certain death. Republicans will stomach any amount of grisly, innocent death without questioning their allegiance to the gun merchants and the NRA. To them, it is a matter of principle — evil, misguided, disgusting principle. We simply must not infringe on the right of gun merchants to make profits — whatever the cost in lives. Raw capitalism trumps lives saved anytime. Which country is the civilized nation? Which country has earned God’s blessings?

This incident leads me to Manifesto No. 3 on the 2020 Democratic Presidential Nominee (DPN).  Our eventual nominee must, of course, be a strong voice for common sense gun control legislation. I would define that as universal background checks (which aren’t even controversial among the general public) and a ban on assault weapons. The nominee must receive the warm endorsement of Gabby Giffords and Mark Kelly,  the leaders in this fight for sanity. You can learn where they stand as the campaign moves on by going to these websites.

But the nominee must also be able to explain the position to gun owners who are traditionally wary of Democratic gun control initiatives. Not all gun owners are rabid NRA types, many are actually for common sense gun safety regulations. So we must appeal to their sense of decency. A convincing voice with whom people in the middle can identify is needed. Despite my age prejudice, I suppose that Joe Biden might be a convincing candidate to talk to reasonable gun owners and allay their (unrealistic, but real) fears about losing their guns. While I am generally reluctant to move to the middle politically, this issue seems to demand it if we are to get anything done. To me, Joe Biden is the potential candidate that stands the best chance of making gun legislation less threatening to gun owners. Of course that doesn’t mean he gets the Quixotic Deacon’s stamp of approval. It is far too early for that.

9 mins read in Quixotic thoughts
Stay Connected!
Get my latest blog posts straight to your inbox!
Your information will never be shared