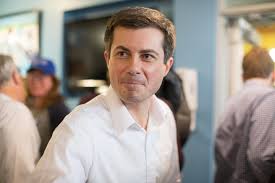 While taking a sabbatical from blogging during Holy Week and Easter, I became more and more intrigued by Mayor Pete Buttigieg’s candidacy for the Democratic presidential nomination. From the outset I was attracted by his resume. I’m a sucker for Rhodes Scholars. He is obviously whip smart and highly accomplished. But the more I heard him speak, the more he impressed me as a compelling personality as well. He talks sense. Now some of his competitors talk sense, too, especially Elizabeth Warren and Bernie.  But they carry more political baggage than Mayor Pete. They already have half the county against them, which says a mouthful about the country, in my opinion.

I can hear you saying, “Whoa, Buck! Don’t you think being an openly gay man living in a same-sex marriage is baggage aplenty?” Fair point.  Many will see Buttigieg’s sexuality and his openness about it as disqualifying. The Mike Pences of this world aren’t ready to support anyone from the LGBTQ community. Are they enough to doom the mayor’s candidacy? Maybe. Add to their number all the macho men who would object to him not being manly enough.  “What? A gay commander in chief, head of all of our military? Not a chance.”

Does all this push him over the edge to unelectability? Again, as sad as it is to say, maybe.  But the fact that he’s soaring in the polls despite what some see as an electability problem speaks volumes about his magnetism and, dare I say, his unadorned, unscripted sincerity.

Mayor Pete offers something else that the country needs. He represents a Christian faith not centered on human sexuality or reproductive rights. He represents a non-judgmental church that welcomes all kinds of people. It is the church he and I proudly and happily call home – the Episcopal Church.

When I went online to find out about the mayor’s religious views, I happened upon an article from the “Happy Atheist”, a publication about which I had been blissfully ignorant. Here’s the link:

The author warns readers to be skeptical of Buttigieg and to not see him as an antidote to right-wing Christians. To the contrary, the author says, Buttigieg really is an unwitting accomplice of the Religious Right because he talks about religious values and policy issues in the same breath. In doing so, the writer continues, Buttigieg legitimizes the role of religion in government, where it doesn’t belong. Here’s a key passage from the article.

Major press outlets are convinced that Buttigieg’s public and liberal religiosity is a game-changer. The New York Times gave the subject enthusiastic editorial-page coverage with a headline: “How to Break the Republican Lock on God.” Similar coverage was seen in The Washington Post, The Atlantic, and other outlets. It seems the pundits are convinced that a gay liberal who also happens to be an outspoken Christian is the Religious Right’s worst nightmare. But it isn’t. Not even close.

Take, for example, this statement he made during a recent Town Hall for CNN: Buttigieg told the audience that his feeling “is that Scripture is about protecting the stranger, and the prisoner, and the poor person, and that idea of welcome. That’s what I get in the Gospel when I’m in church.” He said that the vice president’s perspective “has a lot more to do with sexuality, and, I don’t know, a certain view or rectitude.”

By wearing his religion on his sleeve, and implying that his theology informs his policy positions, Buttigieg ultimately plays directly into the hand of the Christian Right and those who would define the United States as a “Christian nation.”

I think the “Happy Atheist” ignores how plausibly,  convincingly and unapologetically Mayor Pete presents himself: As a political leader whose progressive agenda is informed by, but not dominated by, his religious beliefs. And he does so without sounding like a WEC (white evangelical Christian for you new readers). So, I think it’s unlikely that people who listen to what Buttigieg has to say will associate him with the Christian Right.

When he is lumped into the media-created WEC stereotype, I can relate. People who don’t know me at all might associate me with WECs simply because I am unapologetically Christian.  I can pretty quickly explain to them that even though I wear a round collar, my theology is a bit different from that of the WECs. Buttigieg also is good at setting himself apart from the WECs.  So I think progressives who happen to be atheists have no reason to fear that he’s become an unintentional operative for the Religious Right.

The “Happy Athiest” author goes on to say:

Moderate and liberal Christians have been trying to “out-religion” conservatives for over two centuries but, despite occasional victories, have only failed at greater and greater levels over time. It is now to the point that when one hears the term “Christian” in any political context, one assumes the reference is conservative and, most likely, focused on the topic of sex or abortion. Occasional surprising exceptions, such as Mayor Pete, only prove the general rule.

The sentence  I bolded is something I’ve been saying and writing  for at least 15 years. It’s the greatest fear I have for the church that both Pete Buttigieg and I love: churches in general, even the progressive ones, have been so tarred with the brush of the Religious Right that wide swaths of good people won’t darken their doors on a bet.

So, I am of two minds about a Buttigieg candidacy in terms of its possible effect on religious attitudes in this country. First, my fear is that people will hear “Christian” and think of the stereotypical  intolerant, judgmental, sexuality-obsessed member of the Christian Right. That would hurt his candidacy. Secondly, my hope is that, as people get to know Buttigieg, they also get to know something about the tolerant, welcoming, compassionate church that he and I know. That would be a boon for the church and for the nation.