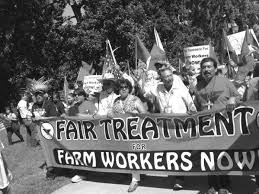 About 20 years ago, I was introduced to the work of an organization called The Rural & Migrant Ministry. It was led by an inspirational and determined Episcopal priest named Richard Witt, and it was my good fortune to be assigned to work for his ministry upon my ordination as deacon. Because I speak Spanish, my first assignment was as liaison with a labor organization of Hispanic  farmworkers in the Hudson Valley. We, the Rural & Migrant Ministry and the Episcopal Diocese of New York, were simply, by our presence with the workers, supporting their struggle for equality.

Believe it or not, farmworkers had just won the right to access to clean drinking water and sanitation facilities (think Port-a-johns) in their workplaces — the fields, orchards and dairy farms of New York State. We focused on winning the right to overtime pay and a day of rest for farmworkers, as well as the right to organize and bargain collectively. Every year in Albany we would lobby for a bill called something like the Farmworker Fair Labor Practices Act. Such bills, which would have been a modest step toward treating farmworkers as other workers are treated, never passed. The Farm Bureau, which represented farm owners, had more money and more influence in Albany than the farmworkers.

So today, if you are a farmworker in New York State, you can work from 41 to 72 hours per week at minimum wage of $11.10 per hour and not receive a dime of overtime. Nor are you guaranteed a day off each week; that’s up to the boss to decide.

Why do we treat our farmworkers as second-class citizens?  Listen to Richard Witt’s testimony before the New York State Senate:

“Every generation before us has found a way to deny these basic human rights, utilizing an array of justifications.  At first glance the roots of this injustice can be found in historic racism, as we have heard through many testimonies.  The basis for opposition to the equal treatment of farmworkers however, has been, and continues to be, economic. We have built an agricultural system in this State, that depends upon the use of subjugated labor.

Many of us recoil at such a description, as it offends our sense of propriety, and our sense of self.  And yet, here are the facts: 1) We have written into law in New York State that farmworkers shall be exempted from rights afforded others; 2) Almost all of the farmworkers in New York are of brown skin and poor.”

Of course the Farm Bureau will dispute Fr. Witt’s analysis and portray the discriminatory laws differentiating farmworkers from other workers as economic necessity. Yet such a representation is wrong on several counts. But I want to mention one in particular. Compared to the rest of the world, American consumers spend less on food as a percentage of disposable income than any country. And the percentage of our disposable income that we spend on food has been going down for the last 50 years or more. Here is an excerpt from an NPR report:

(Spending on food — proportional to our income — has actually declined dramatically since 1960, according to a chart recently published by the U.S. Department of Agriculture. As the chart shows, the average share of per capita income spent on food fell from 17.5 percent in 1960 to 9.6 percent in 2007. (It has since risen slightly, reaching 9.9 percent in 2013.)

And here is the link to that report:

A 2016 report from the World Economic Forum put our food costs in perspective.

Take a minute or two to scan the data in this report:

So, relatively speaking, US consumers are spoiled rotten when it comes to the cost of food as a percentage of their budgets. And part of the reason for that great benefit is that we subsidize low prices on the backs of poor farmworkers whose rights are ignored or scorned.  I contend that the cost of equitable labor rights for farmworkers should be borne by the consumer, who probably wouldn’t notice if apples cost 5 cents more a pound. But the powerful food vendors of the country — Walmart being the biggest — would assuredly block such a reform, because their business model is keeping prices rock-bottom. That means squeezing suppliers for every penny. It’s like a religion with them. And who suffers? The low man on the totem pole — the farmworker. In the middle are the farmers, who have little financial incentive to treat workers better because doing so would cut into profits, which are sometimes thin as it is.

It’s high time that the Farm Bureau, which represents farmers, started spending its influence on fair prices for produce harvested by fellow human beings, as opposed to insisting on the present system of subjugation of farm labor.

Finally, I want you to think about the dedication that Richard Witt exemplifies. Since 1991, he has relentlessly crusaded for the voiceless farmworker. He has spent his life lifting up those who society wants to keep in the shadows. Is his quest quixotic? And what if it is? Richard is one of those heroes who fights for what others have given up as lost causes. In my post entitled Unamuno’s Gift: Quixotic Pessimism (6 June 2017), I quoted a New York Times op ed column by Mariana Alessandri entitled “In Praise of Lost Causes.” I think it applies here as well.

“Quixote fought giants because he could not in good conscience not fight them. We can similarly transform ourselves into quixotic pessimists – the kind who are called dreamers, idealists, or lunatics – by reading more, rejecting common sense, and reinterpreting what constitutes a waste of time. If we happen to succeed by worldly standards, we will be surprised and perhaps pleasantly so; if we fail, we will have expected it. Praise to uncertain successes and certain failures alike.”

It has been almost 90 years since farmworkers were exempted from the Fair Labor Standards Act during the New Deal. The Rural & Migrant Ministry has been fighting that exemption for about a third of that time. Maybe this year they will make it happen!

I want to end with a rare appeal. If you are moved by the plight of farmworkers and inspired by the Rural & Migrant Ministry’s work, take a look at their website and consider making whatever donation you can afford. You will be taking sides in this long struggle for equal rights. And don’t think that this is solely a New York State issue. It is an issue all around the country and getting this bill passed in New York could influence similar constructive legislation in other states.

Mayor Pete and His Religion