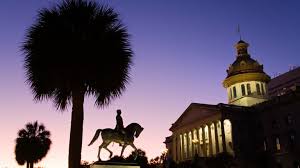 Both my editor, Fitz McAden, and I grew up as proud sons of South Carolina. I remember Fitz’s father, Jim, taking us to the state capitol to visit the governor’s office when we were small boys. The same day, we posed for a snapshot beneath a statue of George Washington on the capitol grounds. Half his bronze cane was broken off, we were told, by brickbats the Yankees hurled at the statue during the Civil War. A few years later, we signed up for boys camp at The Citadel, the Military College of S.C., where we stood up when the band played Dixie. We also learned about South Carolina history in school.

I can’t say how all this affected Fitz’s thinking as an adult, but I made clear my own thoughts about its impact on me in a recent blog, “My Southern Education — A Confession.”

In the blog I expressed misgivings about how growing up in the South had affected me, and it wasn’t all for the good.  As an adult, I resolved to distance myself — physically, emotionally and politically — from the racism, romanticism and parochialism that had trapped the region in the past for so long. I nonetheless maintained a modicum of warmth for my home state; after all, generations of my family have lived there, as have lifelong friends. But these days my loyalty to South Carolina hangs by a fraying thread that could snap at any moment, thanks to the ubiquity of two of the state’s politicians who are front and center in the unholy crusade to re-elect our president.

As you may already have guessed, I refer to Lindsey Graham and Mick Mulvaney, the toady twosome who specialize in brown-nosing our commander-in-chief.

Let’s take a look at them one at a time.

Lindsey Graham comes from a corner of South Carolina — the northwest part — that was the background for the TV serial House of Cards. It is also home of the 8th wonder of the world — the Giant Peach water tower just off I-85 near Gaffney. Said Giant Peach is most famous for bearing a striking resemblance to a part of the human body not mentioned in polite company. You be the judge: 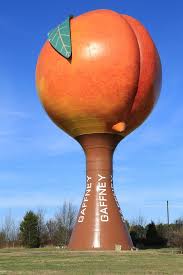 It’s important to know that Lindsey Graham cannot stand to be alone. For years he was part of a Three Musketeers-like group that seemed to show up everywhere together. His partners were former Sen. Joe Lieberman and the late, and much lamented these days, Sen. John McCain. The three had a bad habit of using our military as much and as often as possible anywhere in the world. They were more hawkish, by far, than their fellow Republicans and, of course, than any Democrat. Lindsey found his identity with those two and learned the art of answering reporters’ questions with a folksy quips. He became a media darling, always ready with a pro-war comment or two when they needed one.

With the retirement of Lieberman and the illness and eventual death of McCain, Lindsey was cast loose from his moorings. Adrift, he ran for president in 2016. As a candidate, he came across as aggressively as he had during his musketeer days. He eviscerated Trump in debates and left no doubt about his low opinion of Trump during the campaign, even calling him a “xenophobic, race-baiting bigot” in 2015.

In those days my mother took up for Lindsey, sometimes saying that “he wasn’t that bad.” My mother is a liberal, mind you, from head to toe. I would push back, saying that Graham was a right-wing a****le. And every time I heard him say something reprehensible, I’d call my mom and rub it in. Her days of saying anything remotely positive about Lindsey are far behind us. I take a bit of credit for bringing her around.

When his presidential ambitions dead-ended, what was Lindsey to do? Continue his robust (and valid) criticism of the president? That would have been the honorable thing to do. But wouldn’t it alienate him from his Trump-loving constituency in South Carolina? What to do? Maybe he could walk a political tightrope — support Trump when he could and oppose him when he simply couldn’t morally? After all, his constituents would appreciate him voting his conscience, wouldn’t they?

But Lindsey Graham cannot stand to be alone. He needs a pal. So sometime in 2017, he decided to cast his ethics, morals and reputation aside and wholeheartedly support Donald Trump. His about-face shocked political observers and prompted dozens of articles. But now he has a buddy, one who takes him to play golf, whose swing Lindsey raves about. His buddy puts his foot into his mouth and Lindsey explains it away. Trump is accused of racism and Lindsey, in a 180- degree turn, tells the world that his buddy doesn’t have a racist bone in his body. They are buddies and life is good again for Lindsey.

Now, let’s turn our attention to the other politician threatening to strip away the last remnants of my pride in being a South Carolinian. Mick Mulvaney represented the congressional district in which I was born and raised, where my mother and many family members still live.  He was swept into office by the Tea Party movement, beating our long-serving Congressman John Spratt, a wise, intelligent and honorable man we were lucky to have as our representative, back in 2010. Mick went to Congress preaching balanced budgets a la the Tea Party. He helped found the far right Freedom Caucus now headed by Mark Meadows and Jim (no jacket) Jordan. The Freedom Caucus marches in lock-step with Trump even when he passes tax cuts that raise deficits astronomically.  (Maybe another look at what motivated the Tea Party in the first place is in order.)

Mulvaney served three terms in Congress. His tenure was predictable and, though his views are mostly the polar opposite of mine, he probably did reflect the views of his conservative constituents.  Then Trump chose him to run the Office of Management and Budget. There he championed the 2017 tax cut that benefited primarily large corporations and the rich and which blew a hole in the federal deficit. After years of campaigning for fiscal responsibility, he became head cheerleader for a fiscally disastrous tax cut. Under Mulvaney, the OMB produced a Fiscal 2019 budget with a deficit of just under a trillion dollars, a 26% increase over the year before. What do you call that? I call it hypocrisy.

Mick also used his post at OMB to dismantle the Consumer Financial Protection Bureau, a new agency championed by Elizabeth Warren following the crash of 2008. This was a boon to the financial industry (think big banks) which would no longer have to worry about a pesky government agency fighting for the little guy, the borrower.  For more on how Mick did this, read this article from The New York Times Magazine.

Mulvaney’s rapid ascent continued when he was named acting chief of staff to the president, replacing John Kelly, who departed in December 2018. Now Mick was serving a man who he had called a “terrible human being” two years earlier. And loyal hypocrite that he is, he waits on that terrible human being hand and foot.

Finally, what really pushed me over the edge in my anxiety over Mulvaney’s growing power was something he said last week at his ill-fated news conference that dealt primarily with the Ukraine. You remember. He admitted that indeed there had been a quid pro quo, and told his reporters to “get over it” because that’s how diplomatic wheeling and dealing is done.

But the part of the news conference that stunned and dismayed me had nothing to do with the Ukraine scandal. When a reporter asked Mulvaney a question about climate change and followed up by asking whether that issue would be discussed at the 2020 Group of 7 meeting in the U.S.,  Mulvaney, without a nano-second hesitation, snapped that “climate change will not be on the agenda in 2020.” The way he said it — with a tone of power and triumph — made my skin crawl.

If, please God, we elect a Democrat as president in 2020, Lindsey and Mick and those who support them will  feel cheated, angry and perhaps even rebellious. Maybe it will lead to a movement not unprecedented in the Palmetto State. Maybe they will consider seceding from the Union rather than living under a Sanders, Warren, Biden, Buttigieg or Harris presidency. If that happens, let’s remember the kind of people South Carolina sends to Washington and graciously allow the state to leave the Union, the same way it tried to do more than 150 years ago.