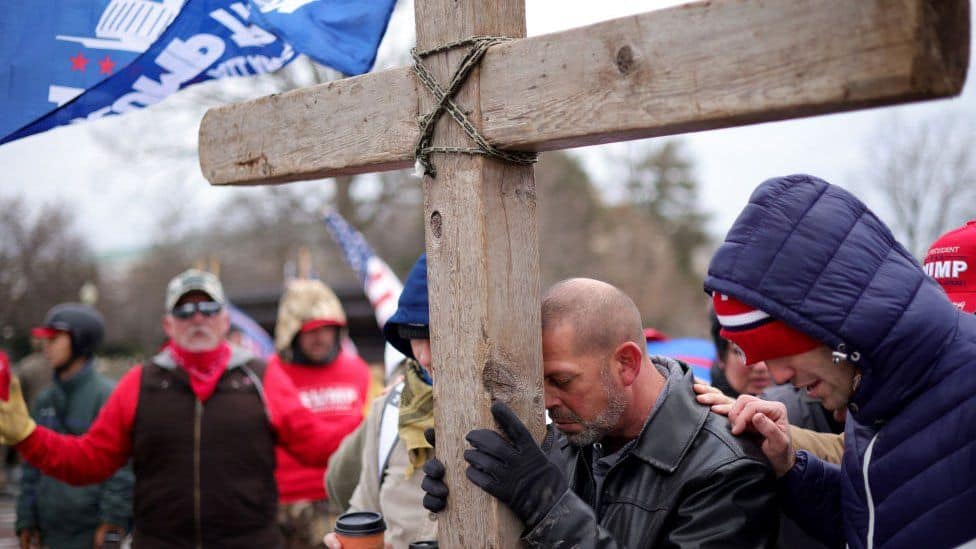 Since the invasion of the U.S. Capitol on Jan. 6, we have been inundated with images of violence and hatred from that day of infamy. Each day seems to bring a new photo or video that shocks. A couple of days ago I saw for the first time video of a rioter leading other insurrectionists in prayer from the well of the House or Senate chamber  — I’m not sure which. He was associating Jesus Christ with the actions of the seditious mob. I also saw a big “Jesus Saves” banner being waved by one of the rioters as he marched toward the Capitol. The images frightened and disgusted me for many reasons.

I’d like to think that this comingling of false religion and right-wing extremism was generated by a tiny minority of the mob. But the evidence says that would be wishful thinking. Listen to this clip from NPR (only 3 minutes) broadcast on Jan.18.

While the ignominious end of the Trump presidency should diminish the power and visibility of this dangerously misguided bloc of voters, it’s hard for me to put them out of my mind. I worry about them and I am annoyed by them for several reasons — some petty and some perhaps more principled.

First, a petty reason.  In a society largely illiterate about “organized religion,” I fret that people who know of my affiliation with the Church might assume that I share the beliefs of WECs. I do not, but at risk of coming off as self-centered and petty, it irritates me that they are the most talked-about Christians in the country and that the brush that has tarred them might also tar me.

More importantly, I worry about how many potential followers of Jesus — which is what a Christian is meant to be — are turning away from religion because they don’t want to be mistaken for a gun-loving, flag-waving, Trump-loving WEC. I am not a 30-year-old seeker looking for a way back to Christianity, so I hesitate to speak for them. But the generations we read about most  — the millennials, Xers, etc. — are unlikely to tolerate a religion whose loudest adherents were front and center in the mob that invaded the Capitol. If you didn’t listen to the NPR clip, go back and do so now. While I do realize that it is a small minority of self-identifying WEC’s who would advocate using violence such as that used in the Capitol on January 6th, WEC leaders were instrumental in selling the Big Lie that Trump had won in a landslide. And without the Big Lie, January 6th would never have happened.

If the WECs had merely introduced to us “the gospel of prosperity,” they would have done enough damage to the Christian faith. You know what that is, right? It’s the gospel that says, “You deserve that new Mercedes! Enjoy it! After all it’s a sign that you’re living right.” But the WECs didn’t stop at condoning unnecessary accumulation of the symbols of wealth; no, they went on to oppose LGBTQ rights, especially same-sex marriage, and the right to abortion for any reason. And they raised up an entire coterie of self-serving leaders who would do anything to build their base of evangelical voters that Trump called “my evangelicals.” Those WEC leaders lied to their followers when they claimed Trump won the election. Those leaders condoned or encouraged repeatedly a call to arms to overturn the election of Joe Biden.

What now, post Trump? Will the power of the WEC bloc and its mostly male leadership be diminished? Will every Republican hopeful feel that he or she must have their backing to win a Republican primary?  Will the ruthless and revolting trio of Cruz, Hawley, and Pompeo, with WEC support, become presidential hopefuls?

It will depend in part on the outcome of what David Brooks, The New York Times op-ed writer, calls a “war within the church.” And while it pains me that he uses “the church” to mean the WEC church, the piece is well worth reading. He refers to the “violent Know-Nothingism” that is rampant in our country. And this is, of course, a necessary ingredient in the WEC political soup. Consuming the soup requires one to accept as truth whatever a Great Leader says, no matter how preposterous, no matter how obvious a lie. Brooks points out that some heretofore evangelical leaders have been returned to sanity by the events of Jan. 6. Will they win the war or will Trumpism, the cancer in the bosom of the WEC bloc, continue to hold sway? Here’s the link to Brooks’ piece:

P.S.: While it may seem presumptuous of me to speak for the WECs, I can speak about my own Episcopal Church with much more authority. We are not at war. We didn’t invade the Capitol. We have a presiding bishop, Michael Curry, who speaks for us eloquently and persuasively. We are not bound to agree on everything, but we happen to agree on most important things. We don’t think that God wants us to have a new Mercedes or that She condemns same sex marriage. And we know that our way of following Jesus may not be the only way, but we believe it is right for us.

Reflections on Public Killing on the Feast of the Holy Innocents