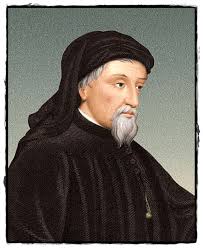 In Geoffrey Chaucer’s seminal work, The Canterbury Tales, we meet a disreputable character known as The Pardoner. In the Prologue to his tales, Chaucer tells how The Pardoner cleverly dupes his victims and amasses great wealth through preaching. He is known to be ribald and irreverent but tells a tale of great irony that illustrates the maxim that greed is the root of all evil.  Nevertheless, we are left with a dim view of the morality of The Pardoner himself.

A latter-day pardoner — our president — has initiated a spate of pardons in the past few days that have us all atwitter. But unlike Chaucer’s pilgrimage to Canterbury, this rogue is not forthright enough to confess his lack of morals before telling his tale.

Presidential pardons rarely have much to do with the moral high ground. They often smack of cronyism and payback.  Bill Clinton’s pardon of Marc Rich, a fugitive financier and crook, was criticized roundly by some of his own supporters and smacked of insider dealing and outright bribery. Presidents from both parties have abused their pardoning power. But Trump is breaking new ground by using the constitutionally bestowed power as a political tool early in his presidency as opposed to on his way out. Ask Sheriff Joe Arpaio, Dinesh D’Sousa, Martha Stewart, Governor Rod Blagojevich, or Scooter Libby. His supporters say that this is the honest thing to do rather than do all the pardoning as he is walking out the door when no one can do anything about it. But such thinking ignores the fact that these pardons are political messaging meant to tweak his opponents and reassure his indicted co-conspirators that he will be there for them when they are sentenced. Trump undoubtedly loves the feel of dispensing his perverted justice with no fear of opposition from pesky judges or legislators.

“But wait!” you say. “Didn’t he just pardon some poor woman serving a life sentence in Alabama for a first offense drug trafficking charge? Surely even the Quixotic Deacon should laud him for that bit of justice-doing?”

Yes, he did. But dig a bit deeper into this case. Here’s what happened:  Reality star/celeb Kim Kardashian West saw a video that had gone viral on social media. It introduced her to a case (one of thousands) about which any sane person would agree. The prisoner in question, Alice Marie Johnson, 63, had served over 20 years of a life sentence for a first time drug offense, was no threat to society, and should be released.  So Kim, who is married to Trump supporter Kanye West, contacted Trump son-in-law and jack-of-all-portfolios Jared Kushner. The press is alerted. A photo op is arranged with Kim and Trump in the Oval Office. And, presto!, Alice Marie is free — as she would have been long ago if we had a criminal justice system the equal of, say, Kazakhstan’s. And, in a totally shocking development, Kim gave all the credit to Trump and Kushner — two paragons of compassion.

[In a sidebar, we learned that Trump’s eminence grise, Chief of Staff John Kelly, opposed the pardon. Like the 11,000 children of immigrants now separated from their parents and detained by ICE, Alice Marie, a grandmother, should have stayed in prison, according to tough guy Kelly.]

This pardon, though long overdue, simply makes a sad point about our criminal justice system. (By the way, shouldn’t something so manifestly unjust be called a criminal injustice system?) Alice Marie’s supporters got lucky. They managed to get a social media video noticed by a wealthy reality star who moves in Trump’s sleazy circles of charlatans and yes men and women. They hit the pardon lottery.  And, for Alice Marie’s sake, I am glad they did. However, one pardon begs the question. Are there more Alice Marie’s out there? Let’s look at the statistics.

A website called Drug War Facts (www.drugwarfacts.org), using the U.S. Justice Department’s own data, tells us that at the end of 2015, 197,200 people were in state prisons — their most serious crimes, so-called non-violent drug offenses. Had they used deadly force in the commission of their crime, their most serious offense would be that act of violence, not the drug offense.

More astonishing is the fact that at the same date, the most serious offense committed by 44,700 inmates in state prisons was drug possession!  Alice Marie would have been one of the 197,200, not one of the 44,700 because her crime was more serious than possession. The statistics ignore race, but race is an important element. Latinos are incarcerated at double the rate of whites; blacks at five times. So one pardon is pretty much meaningless unless you happen to be Alice Marie Johnson or our hero in the White House, whose base will, no doubt, admire his newly discovered sense of justice.

What if . . . . our President really wanted make an impact on cruel and unusual punishment? What could he do? Well, he could ask public defenders in each state to name the top 10 inmates who most deserve to be released from prison. Then a bipartisan panel of lawyers could review the 500 recommendations, cull the list if necessary, and present it to the president for the pardons. Thus, we could slowly chip away at the great injustice of our prison system in one small area. Of course, before proposing this Trump would have to fire John Kelly and Jeff Sessions, who love prisons and long mandatory sentencing.

Before I leave you, let me state the obvious. Every statistical analysis that I have seen emphasizes what one already knows intuitively. Our criminal justice system preys disproportionately on the poor. If you are white and middle class, you are not going to jail for marijuana possession. Justice in this country, especially in the South, is rationed by income and is anything but color-blind based on even the most cursory analysis of data.

Cheap Patriotism and the NFL