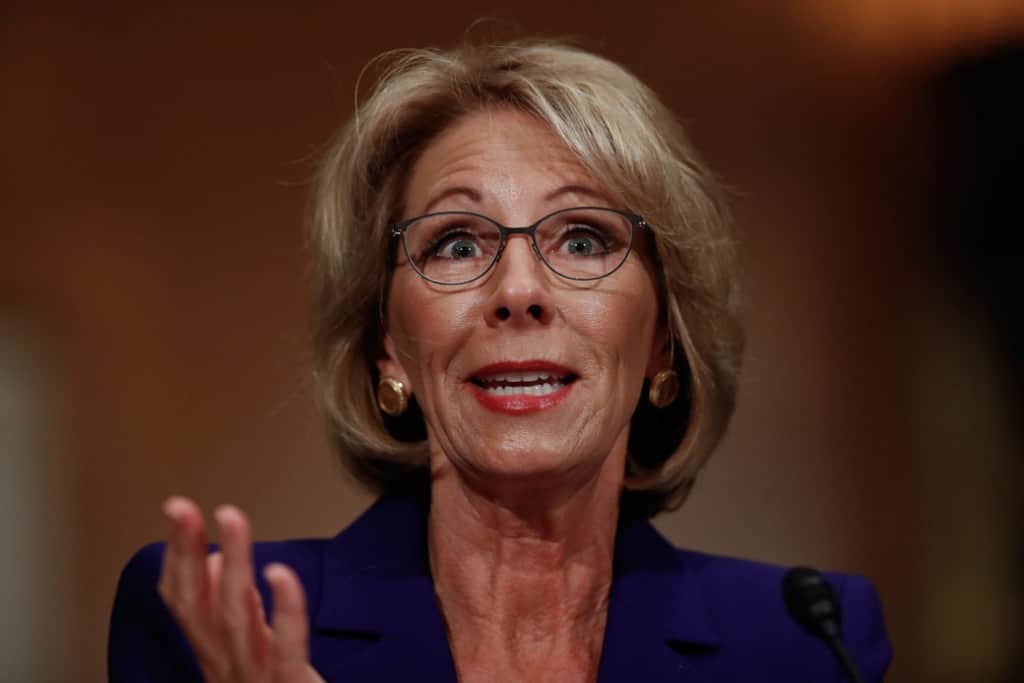 Earlier this week I noticed a Facebook post from Lee McAden Robinson. Lee is the elder sister of Fitz McAden, who edits this blog. I’ve known them both all my life. Lee’s post had the catchy caption, “This woman is the devil incarnate” above a picture of our Secretary of Education, Betsy DeVos. I commented on the post, agreeing and saying that my mother, Anne Close, has said the same about DeVos for years.

If you care one whit about public education or the influence of super-rich right wingers on public policy, you owe it to yourself to learn more about DeVos. I learned a lot after doing some digging myself.

She descends from Dutch settlers who came to Michigan in the mid-19th century to escape Holland. What? Who wants to escape Holland? Here’s how it happened, according to an article in Mother Jones magazine:

In the mid-1800s, a group of mostly poor farmers known as the “Seceders” rebelled against the Dutch government when it tried to modernize the state Calvinist church, including by changing the songbooks used during worship and ending discriminatory laws against Catholics and Jews. In 1846, an intensely devout Calvinist clergyman named A.C. van Raalte led several hundred settlers from the Netherlands to the United States.

(Yes, you read that correctly. These people left Holland because the government messed with their hymnals and asked them to quit discriminating against Catholics and Jews!)

Here’s a link to the article:

So we know the DeVos family and the Prince family, which gave us Betsy and her brother Eric, had rigid Calvinist backgrounds. Eric is noteworthy in his own right; he founded the murder-for-hire firm known as Blackwater. Betsy dreamed of  an educational world in which tax dollars for public education could also be spent on the kind of private Christian schools like those that had reinforced her own beliefs. Funding Christian education with the public’s money became her life’s work.

DeVos’s antipathy toward a fundamental democratic ideal  — “do the greatest good for the greatest number” — goes well beyond diverting public money to private religious schools. She and her family are fiercely opposed to the practice of workers banding together to bargain for better pay, working conditions and benefits. Back to Mother Jones:

Meanwhile, the DeVos clan is perhaps best known for hard-nosed political activism against organized labor. In 2007, coming off Dick DeVos’ unsuccessful gubernatorial bid in their home state of Michigan, the DeVoses focused their advocacy and philanthropy on controversial right-to-work legislation that would outlaw contracts requiring all employees in unionized workplaces to pay dues for union representation. Back in 2007, such a proposal in a union-heavy state like Michigan was considered a “right-wing fantasy,” but thanks to the DeVoses’ funding and insider knowledge — Betsy was once the state GOP chair — the bill became law by 2012.

Defunding public schools checks off two boxes on the DeVos “to do” list: attacking teachers’ unions and weakening, perhaps fatally, public school systems. Next on the list is her vow to withhold federal money from schools that open without in-person classroom teaching. And further down her list: Making federal relief money to prevent Covid 19 infections in re-opened public schools also be  available to private schools. She mandated the same thing in March when the initial stimulus money was distributed. From The New York Times on July 16:

Public schools faced a funding crisis even before the pandemic. K-12 schools received $13.5 billion from the federal coronavirus relief package in March (though Education Secretary Betsy DeVos has required that it be shared with private schools). School officials and education policy researchers say that the money was not nearly enough, and that because states are facing budget shortfalls because of lockdowns, schools would need a huge federal infusion of cash to reopen for all students.

If Betsy DeVos and her family were the only powerful people scheming to destroy public schools, they probably wouldn’t succeed. But they have powerful allies. The libertarian right, led by the Koch dynasty, for example, has been at this longer than the DeVos clan. The motivation is not religious. It’s ideological. They want the government entirely out of education. Their prophet was the late Milton Friedman, a world-renowned economist from the so-called Chicago School – a group of monetarist economists who want the government out of almost everything except controlling our borders and catching criminals.

Friedman and his apostles exploited the chaos in New Orleans after Hurricane Katrina to virtually eliminate public schools, according Naomi Klein, author of The Shock Doctrine. Why would they?  Klein explains:

For Milton Friedman, however, the entire concept of a state-run school system reeked of socialism. In his view, the state’s sole functions were “to protect our freedom both from enemies outside our gates and from our fellow citizens: to preserve law and order, to enforce private contracts, to foster competitive markets.” In other words, to supply the police and the soldiers — anything else, including providing free public education, was an unfair interference in the market.

Lest you think such thinking exists only on the fringe, consider the number of right-wing, Koch-funded think tanks busily creating policy in this Republican-dominated era: The American Enterprise Institute, The Cato Institute, The Federalist Society to name just three. (The latter compiles the list of candidates for judiciary appointments that Trump uses exclusively.)

Think of Betsy DeVos as one prong of a larger, well organized movement bent on destroying public education. She and her ilk are motivated by misguided religious zeal, specifically a Calvinist view of the world that sees public school curricula as godless and immoral. Adherents are represented by activist groups funded by the Devos and Prince families, such as Focus on the Family. They advocate a parade of evils: Unrestrained capitalism (they prefer the gentler euphemism, “free-market economy”); they are ardently anti-union and anti-LGBTQ. So virulent is Focus on the Family’s anti-gay animus that the Southern Poverty Law Center labeled it an anti-LGBT hate group. The Princes and the DeVoses donated over $12 million to Focus on the Family and its offshoot, The Family Research Council, between 1999 and 2013.

We don’t seem to get as wound up talking about education as we do about issues with more sizzle — race relations, Covid-19 or Trump hyping cans of Goya beans lined up on top of the Resolute Desk in the Oval Office. It’s a shame because, come November, if voters haven’t realized that a vote for Trump is a vote to dismantle our public school system, neither I nor like-minded people will have done our jobs.

Revisiting Patriotism after the 4th of July 2020