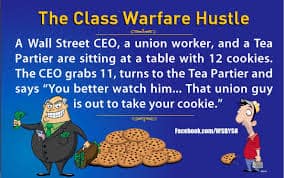 In the heat of political debate about socio-economic inequality,  Democrats (usually) are accused by Republicans (usually) of provoking class warfare when they juxtapose the plight of America’s poor with the riches of the upper 1 percent. And most commentators seem to take it as axiomatic that the charge is contemptible indeed. It seems as if engaging in class warfare is just short of engaging in genocide in the minds of the accusers and, perhaps, the public at large. After all, in our great democratic republic differences in class surely is a passe concept. We are all equal under the law. Aren’t we?

Well, in typical quixotic fashion, I challenge the notion that class warfare is a thing of the past. Were I a wage earner in 21st century America, I am certain I would feel I was losing a class war to the top 1 percent. Further, I would feel my government had put its thumb on the scale to favor the rich. And I think that belief is supported by a rational examination of the recent past. Although the ongoing economic attack on the poor didn’t start when President Trump was elected, it has definitely accelerated under his leadership — even though it’s nonsensical to use the word leadership in the same sentence as the word Trump.

Therefore my next few posts all will be about economic class warfare – the war being waged on behalf of the wealthy and the large corporations that they own and control. And let me declare at the outset that my reading of the Gospel of Jesus Christ tells me that his disciples must be on the side of the poor. So I don’t apologize for preaching on their behalf.

5 mins read in Quixotic thoughts
Stay Connected!
Get my latest blog posts straight to your inbox!
Your information will never be shared