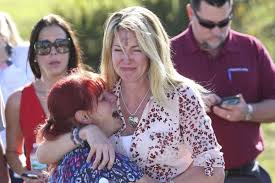 The season of Lent is barely a week old. However, one of my Lenten disciplines, journaling, is paying some dividends already. In the process of self-examination, I discovered that I am consumed by anger, chiefly about the gun issue. The depth and persistence of this anger makes it seem almost like a mental illness. This couldn’t be good for me as a Christian or as a human being. I think I disguise it rather well, but it is there lurking inside me like a cancer.

Now it goes without saying that I have a lot of company — people who share this malady.  Episcopal Bishop Morris Thompson of Louisiana said as much in his pastoral letter to this diocese last week.

Over the years I have learned that it takes a good bit to truly anger me.  I get frustrated and irritated at times but anger is not something I experience very often.  That being said, I have been angered and confused by the shooting in south Florida this past week in which seventeen youths and adults died at the hands of a 19-year-old boy.

Fr. Terry of St. Anna’s church in New Orleans  preached eloquently on the subject on Lent 1, and made me think that we should use our anger in a positive way: turn it into a force for good. We are a violent country and all of us need to work to reduce the violence that so marks our society.

This morning I read an opinion piece by David Leonhardt on the online New York Times. It was entitled “There’s Reason for Hope on Guns”. He wrote about the temptation to despair and the danger of doing so. He captured my mood and the cause of my anger perfectly when he wrote:

I fully understand the instinct to despair about guns: kids keep dying, and things never seem to change. But the only way they will change is if people outraged by gun violence resist despair.

Leonhardt then goes on to list a few reasons to justify some hope. Here is the link to his article, which I recommend if you’re angry and near despair about gun violence.

So, motivated by my own Lenten self-examination and by Bishop Thompson, Fr. Terry and David Leonhardt, I will try to shed my anger and, instead of seething, do everything within in my power as an individual to fight for gun control. Yes, I know that mental illness plays a part in all this, but all countries have similar mental illness profiles. Only one has mass killings with such numbing frequency: Our country.

In moving away from anger toward optimism, it’s useful to go back to the concept of quixotic pessimism. See my post of June 6, 2017, https://thequixoticdeacon.com/quixotic-thoughts/unamunos-gift-quixotic-pessimism/. ‎

In that post I quoted from an op ed in The New York Times by Mariana Alessandri:

“Quixote fought giants because he could not in good conscience not fight them. We can similarly transform ourselves into quixotic pessimists – the kind who are called dreamers, idealists, or lunatics – by reading more, rejecting common sense, and reinterpreting what constitutes a waste of time. If we happen to succeed by worldly standards, we will be surprised and perhaps pleasantly so; if we fail, we will have expected it. Praise to uncertain successes and certain failures alike.”

Don’t you think that quote applies to the struggle for common-sense gun laws in this country? The madness wrought by gun manufacturers, their lobbyists, and the politicians they have purchased (think Speaker of the House Paul Ryan) seems irreversible, but that’s despair talking. We have to push past despair and remind ourselves that not too long ago — from 1994 until 2004, a time well within my memory — we had an assault weapons ban.

The students who angrily confronted Florida lawmakers in Tallahassee demanded that such guns be banned again, for good. Could they be the leaders we need to turn things around? On March 14 students and teachers across the country will walk out of school on the one-month anniversary of the Parkland shootings. And then, 10 days later, there will be a march in Washington and other cities led by those same students. Will the forces of violence — the NRA and their bought-and-paid-for politicians — dare to condemn them?

So what can you do to turn despair into optimism — and action? Here’s a suggestion, something I’m going to do. Go to March for Our Lives www.marchforourlives.com and a) send some money if you are so moved and b) sign up to march in a city near you on March 24, or Washington if you’re able to get there. Let’s quit licking our wounds and being angry and do something. This might be a good first step.

Pawns in the Partisan Game – the Dreamers