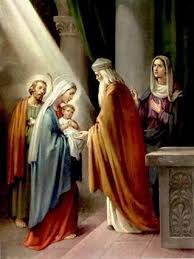 One of the things that I love about being an Anglo Catholic is the emphasis we place on following the church year as opposed to the secular year. That’s why I entitled this post as I did. Those of us who pay close attention to the church year know that many parishes celebrate the Feast of the Presentation, also called Candlemas. Candlemas is always on February 2nd , 40 days after Christmas and 33 days after the Circumcision. According to the Torah, a woman presented herself in the temple for purification 33 days after the circumcision of a boy. You can read about that in Leviticus, Chapter 12, if you’re curious.

Candlemas is also the day when the candles that will be used throughout the year are blessed in a ceremony in the church. Processions are often involved. Although this feast is virtually unknown except to ‘high church’ Episcopalians and Lutherans, it is a Prayer Book Holy Day and gives one the opportunity for a fun procession and a unique worship experience. My Rhode Island parish, St. John’s Newport, celebrated Candlemas in fine style Saturday morning with my former parish, St. Stephen’s Providence.

That’s my bit of ecclesiastical lore for today. I hope it piqued your interest in the Church calendar.

Now I want to briefly comment on three issues:

While I take a back seat to no one in my desire to dethrone Trump, I’m already tired of hearing that I cannot support candidates like Warren, Harris, and Booker because they are too liberal. “Too liberal” is code for “unelectable.” I hear that anyone who espouses single-payer healthcare, that is, Medicare for all, is unelectable. And anyone who signs onto any version of the Green New Deal (which definitely does need some defining) must be too liberal. A longtime friend just told me this morning that Bernie Sanders was crazy — far too liberal.

It dismays me to be asked to forego ideas that I support wholeheartedly: (Green New Deal (properly defined) or Medicare for all (properly defined)) simply because they make people to my right uncomfortable. And on the issue of electability, it’s too soon to talk about it. That time will come later and polls a year from now will tell us a lot more about who’s electable and who’s not. So I am not turning my back on Kamala Harris or Elizabeth Warren or Cory Booker, and I hope I never will. The only candidates I have eliminated are Joe Biden and Bernie Sanders, due to age. And if Hillary Clinton is foolish enough to think she can be a contender, I eliminate her as well.

Venezuela is a failed state and the government of Nicolás Maduro gets the blame. He deserves to be overthrown by any means necessary except one —  US military force. Our foreign policy toward Venezuela is now in the hands of a man named Elliott Abrams who is supervised by a man named John Bolton.  I have mentioned Bolton before — he’s a super hawkish champion of the military-industrial complex. If you don’t know about Bolton, spend a few minutes Googling him. Elliott Abrams is a man who never should have been hired for any government position, even by an amoral administration.

Abrams was convicted of lying to Congress in the Iran-Contra affair. He was later pardoned by Bush 1. But he’s guilty of far more serious crimes. He aided and abetted the Guatemalan dictator Gen. Rios Montt in the 1980s while the general loosed death squads on the indigenous people of Guatemala. Rios Montt was later convicted of genocide. He couldn’t have done it without Abrams, now our point man on Venezuela. Men like Abrams and Bolton and  Secretary of State Mike Pompeo shouldn’t have a hand in our relations with any Latin American country. They are the quintessential ugly Americans bent on using our mighty military machine to govern the hemisphere. They don’t do this for personal gain. They do it because they are true believer neocons. They believe in projecting our military anywhere in the world to remake it in our image. But having Abrams as point man is a bridge too far even for the Trump administration. Abrams is justly despised by anyone who cares about the people of Latin America. Please peruse the following article/interview to understand.

What the WECs Are Up To

Trump’s poll numbers show that his support among white evangelical Christians (WECs) is rock solid. Is it because they are all misguided? Do they simply adore fat men with spray tans and ludicrous hair? Is it solely about abortion? Is it their opposition to same-sex marriage? I suggest the answers to those questions are Maybe, Maybe, No, and No. Their support of Trump may involve  his being on their side vis a vis abortion and marriage, but a bigger reason is that their leaders — people like Ralph Reed, Franklin Graham, and Jerry Falwell Jr. — are Trumpsters. They love what Trump is doing to our courts and they love his appointees. His cabinet is loaded with WECs starting with the WEC poster boy, Vice President Mike Pence and his wife Karen. They (the WEC leaders) have an agenda and have easy access to the White House. This article in The Guardian will spell it out for you:

Having WECs like Sarah Huckabee Sanders (“God wanted Trump to be President”) front and center in our government will turn off a generation or two of young people who might otherwise have been inclined toward religion. To be sure, I am a fervent follower of Jesus, but forcing one’s religious beliefs on others is wrong.  If Sanders herself is wrong-headed enough to believe that God wants Trump to be president, it’s her business. But it’s not her business to undermine the faith of others by pushing such an absurd notion. I’m not sure if it’s outright blasphemy, but it is surely tawdry theology. So much bad religion is being paraded before the nation by our so-called public servants that it’s no wonder young people are abandoning the organized church in droves. Their departure worries me as much as the fact that the WECs vote like Republican lemmings.

The Quixotic Deacon’s Quest for a 2020 Candidate – Manifesto #2