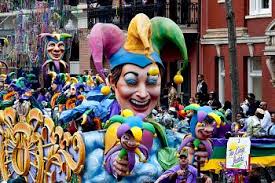 For the large majority of you who don’t live in New Orleans, you might not realize that Mardi Gras is a season, not merely the eve of Ash Wednesday. We began in earnest on Friday, Feb.22,  then parade almost ceaselessly for the next 12 days, until Ash Wednesday. Please don’t picture your Quixotic Deacon stumbling around the streets at all hours covered in beads and smelling of beer. My wife Lucy and I are not big parade people unless our grandsons are here. They won’t be this year because they used winter vacation to go skiing. So it will be a quiet Mardi Gras for us.

One of my readers died this week. Jean Barry was a deacon in the Diocese of Rhode Island who founded and ran a shelter for the homeless poor called the WARM shelter. She was tireless, innovative, feisty, and fearless. She was a role model for many, me included. She last wrote to me on January 28th in response to my blog that mentioned the Green New Deal. Here is what she wrote.

I have been thinking right along with your thought process for the last few weeks, since I heard of the Green New Deal.  If you and I are thinking this way there must be others out there who agree with us. I believe if we don’t push this issue to the front of issues planet Earth might not survive.  I know there are a good number of young persons who are pushing this issue but adults are not responding. Still, thinking will keep you informed if I ever get a moment of clarity on what I can do.  I don’t know if you know but I am on Hospice so my journey right now is in slow motion. I intend to keep this issue as part of the journey I am on.

Even in hospice, Jean was thinking about issues and what she could do. What does that say to the rest of us who are not in hospice but in relatively good health? Are we equally concerned about what we can do? She signed her note to me with the words “Joy and Justice.”  I interpret this to mean that she would want me to work for justice joyfully. Thank you, Jean, for your wisdom and for living your compassion.

Weeks before the last State of the Union speech I warned readers that Republicans would be screaming “Socialism!” loudly and often over the next two years. The Orange Man promptly made me look like a prophet by promising that our great country would never allow socialism to displace our beloved capitalism. I imagine his “base” had tears in their eyes at these courageous words. One of the great challenges for Democrats in the 2020 presidential race is to explain the absurdity of the notion that the country could slide into socialism. This is the Republicans’ second big lie. First they invented the lie about the crisis on our southern border, despite the fact that there is no crisis. Now they’ve invented the lie that the country is in danger of becoming the next Cuba or North Korea as we lose all our individual rights to the huge socialist state. No intelligent person could believe this, but millions in Trump’s base will swallow it hook, line, and sinker.

Our Democratic nominee must dismantle this fantasy. Here are some of the points that he/she must make:

Our economy is mixed — neither purely capitalist nor purely socialist. We have programs like Social Security, Medicare, Medicaid, food stamps, etc., that could be called socialist, and we love them. Government has always meshed with the free market in this way.

The countries that are modern and socialist are best represented by Scandinavian nations such as Denmark, Sweden, and Norway. How bad is life there? Rich entrepreneurs abound in Scandinavia, as do wage earners. But the wage earners are middle-class and the rich people are not quite as rich as in countries where capitalism reigns supreme. What’s so bad about that? What the hell are Republicans afraid of?

Our tax policy, over the past two decades especially, has veered sharply toward lower tax rates for the rich. I remember paying a 72 percent marginal tax rate back in the ’70s. And guess what? I still had all the money I needed. So labeling  reasonable tax policies as “Socialism!” is more than misleading. It’s a lie. The rich should pay higher taxes to make our tax policy more fair and balanced.

The most socialist this country has ever been was probably back in the ’50s. We saw great growth. The government was pumping enormous funds into the economy with the GI Bill. College was free for veterans. The government subsidized housing for returning GIs. Unions were strong and growing.

This was after we’d defeated Nazism and imperialism and felt that we owed something to the soldiers and citizens whose sacrifices literally saved the world. It was a time when the U.S. was far more socialist than we are now. Why not go in that direction today?  Don’t we owe something to the people on the bottom rungs who have struggled as the rich got richer?

This very morning I learned that Bernie Sanders, who declared for the 2020 race yesterday, had raised over $6 million in the first 24 hours after his announcement. That trounces all of his Democratic opponents’ fundraising, proving he still has an army of followers. I have stated multiple times that I cannot support Bernie because of his age. He is too old to be President. (Heck, I am too old to be President.) But I love his policies. I love what he stands for. I even love the label Democratic Socialist. Lucy can’t support him because she calls him unelectable, but I am not sure about that. So I am squirming in my seat. I want to be with Bernie, but A) he is too old, and B) he is a white male and I don’t think this is the time to have a white male at the top of the ticket. So I will go on loving everything about Bernie — including his hair — but sitting on my hands in terms of backing him.

Thoughts on the Eve of Candlemas