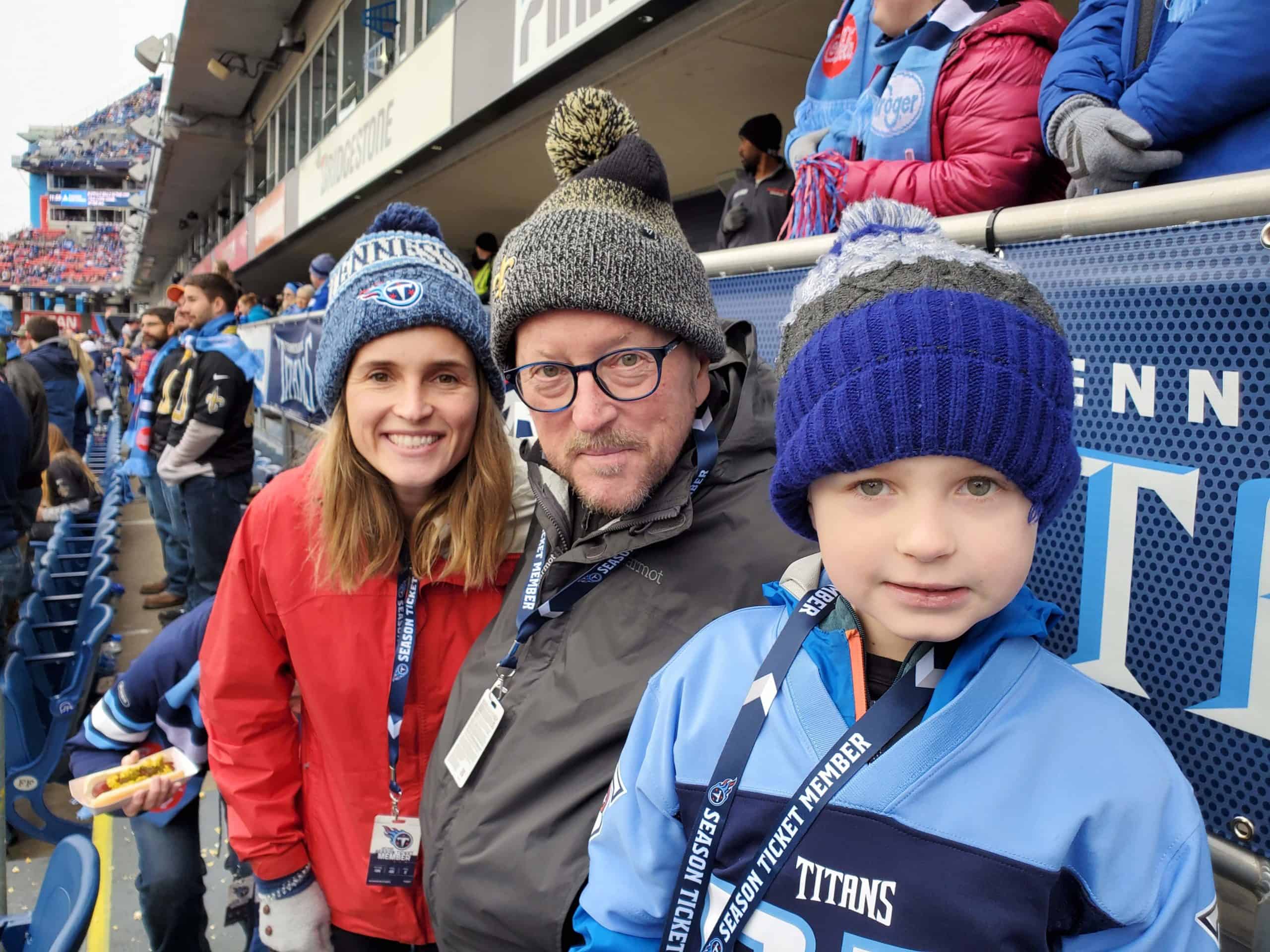 (Photo above: The Quixotic Deacon, Crandall, and Walker at Saints vs Titans, Nashville, Dec. 2019)

On a fall afternoon almost 50 years ago, Lucy and I looked down from the stands of Tulane Stadium, the old Sugar Bowl, hopelessly watching the last play of a nail-biter between the Saints and the Detroit Lions. The numbers on the scoreboard were grim: 4th quarter, 2 seconds on the clock, Saints down 1 point after a back-and-forth, 17-16, game. If that weren’t enough, the Saints were far away from the Lions’ goal line.

Way too far, we knew, for the Saints to pull off a miracle. Then out trots our portly kicker, Tom Dempsey. Saints fans buzzed in disbelief because the goal posts were 63 yards downfield, a distance then believed to be way outside any kicker’s range. It might as well have been a mile.

Of course, a miracle did happen: Dempsey kicked; the ball sailed flawlessly skyward, then through, the uprights, and the Saints won 19-17. I vividly remember the Lions’ Alex Karras, furious in defeat, flinging himself to the grass and pounding his fist in frustration. (The same fist, incidentally, that Karras used to deck a horse in Blazing Saddles. Karras, by then a thespian, played the role of Mongo.)

Lucy and I hung around the stadium for an hour after the game to cheer Dempsey when he emerged from the Saints’ locker room. What happened that day on Nov. 8, 1970 is etched in my brain like few others. We literally jumped up and down with joy.

Tom Dempsey was born with half a right foot and wore a special kicking boot shaped like a square. He loved kicking off, then running haltingly downfield to hit players on the receiving team. His family recalls him suffering several concussions, and being diagnosed in 2010 with dementia. Whether the concussions caused dementia is an open question these days.  Lately Dempsey lived at Lambeth House, a senior living center in New Orleans about a half mile from my home. The facility has become an epicenter of Covid-19, which killed Dempsey.

He was a colorful character. I remember a TV ad that featured his squared-off right kicking boot launching a loaf of Bunny Bread into the stratosphere. (Only in New Orleans.)  His New York Times obituary noted that Dempsey “loved New Orleans nightlife.” His wife, Carlene, told The Times that she didn’t hear from him for several days after his historic kick. Apparently two New Orleans cops delivered cases of cold Dixie beer to the locker room after the game, an act of homage that touched off prolonged celebrating.

Tom’s death prompted happy recollections of the thousands of sports events I’ve watched or attended over the years: Game 6 of the 1986 World Series sticks out as a highlight. Watching Affirmed and Alydar battle down the stretch in the Belmont Stakes when Affirmed clinched the Triple Crown is something I’ll remember clearly until the day I die. I could go on and on and on.

Sports has been a rich source of diversion and memories for me since 1969 when I transferred to Tulane. You see, at boarding school, I was not much of an athlete and generally had a bad attitude about athletics. All the jocks were the darlings of the school, which pissed me off. So I rebelled and actually rooted against some of our teams in crucial games. I was aided and abetted in this traitorous behaviour by another boy, a real ne’er do well, who hated organized sports — one Ira Lee Griffin. Unlike me, Lee never warmed up to sports and is blithely unaware of the sporting world to this day. So he didn’t even hear about Dempsey’s miracle kick.

I write at this time of forced separation from sports. I had tickets to the Women’s Final Four, which was supposed to be last week. My friend Melissa Bostrom from Newport, RI, who knows everything about women’s basketball, was coming down. We’d have seen Sabrina Ionescu — the greatest active basketball player of either sex — play for the Oregon Ducks. And my home state of South Carolina was bringing its No. 1 seeded Lady Gamecocks (what an oxymoron!) to the tournament. I’d been looking  forward to the Women’s Final Four for months. And then it all went up in smoke.

But I’ve lost much more . . . . Tulane baseball having its best season in many years; NOLA Gold Rugby; my beloved LPGA; the Women’s National Team competing for gold in Olympic football (a.k.a. soccer), Europa 2020 soccer; the Mets; the Triple Crown; Six Nations Rugby. All gone, memories that won’t be made.

When the Covid-19 pandemic hit home about a month ago, I admit that my regrets centered on canceled or delayed games. That, I realize, is something I should be ashamed of, and I am. But only sort of. I quit thinking about sports within a week after it all ended. Cold turkey. No problem.

But hearing that Tom Dempsey was near death triggered a flood of warm  memories. They provided some pleasure amidst the gloom of today’s socially distant existence. So I thought I would pass along a suggestion in case you  too have memories locked up in your head.

The Pandemic and the Climate – Time to Think