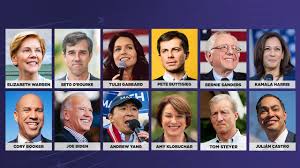 Of all the candidates who have pulled out of the race for the Democratic presidential nomination, the one I’m most perplexed about is Cory Booker. Why in the world did he fail to compete?  When he withdrew, he said he had run out of money. OK, but I’m still baffled about why he labored in single digits for all those months on the campaign trail. People love Mayor Pete’s resume. I certainly do. But take a look at Cory Booker’s. He’s been mayor of a big, poor city. He has served as a senator, now in his second term. Is he perfect? No, but he sure looked good to me compared to the other contenders. I’ll be damned if I can figure out why he didn’t click with Democrats before money ran short. No one I’ve talked to has said anything to help me understand why Booker fizzled.

Honestly, wouldn’t you rather have Booker at the top of our ticket than, say, Bernie, Elizabeth or Joe? I unabashedly would.

Some of the others who are already out, or soon will be, were predictable. There were those nobody knew: Hickenlooper, Williamson, Inslee, Patrick, Bennet and Delaney (the last three technically still running). At least one — Beto — didn’t wear well and Kamala, one of my early favorites, didn’t endure well either. (I confess I was influenced by my daughter and my eldest son, whose disliked Kamala intensely.) Most of the dropouts said they withdrew because they lacked money to press on. They weren’t as good at raising money as the remaining candidates.

Do we need another good reason to get money out of politics? Please, God, give us publicly funded elections with campaigns that last only six weeks!

A candidate’s ability to raise money for primary season doesn’t necessarily have anything to do with his or her ability to win a general election against Trump.  Both candidates will have plenty of money once they are nominated. Some say that the inability to raise big money quickly in the primaries (e.g., Cory Booker) is, in and of itself, disqualifying since fundraising is so crucial to getting elected. But my view is that being good at raising money isn’t really an indicator of future governing acumen. And that is why, at the risk of repeating myself, we need publicly funded elections.

In my view,  the remaining viable Democratic candidates fall into one of three different categories when it comes to fundraising:

Any one of them could get my enthusiastic support, but I wouldn’t be so sure of that if Booker were still around.

So as I labor to not watch the impeachment trial of Donald J. Trump, my mind often turns to November and I nearly break out in hives. Since we don’t have a younger, darker, brilliant, proven leader, like Booker, we’re forced to play the hand we’re dealt. So, for what it is worth, here’s where I come down a week before the Iowa caucus and the primaries that follow:

Where does all that leave me at the end of January? I am disappointed that I don’t have a person of color or a woman who I think should be our nominee. We need a change of gender at the top. But I have to deal with the reality of today.  I could support any of the above over Trump, of course. Some would be difficult, though, for the reasons I’ve stated. President Gabbard?? However, if Cory Booker were still in the race I would have a clear favorite. Since he isn’t, I think Michael Bloomberg may be the strongest of the field. I am reluctant to say this because it is only because of his money that he is even a possibility. That rankles a bit. But his money was earned creating a real business and he did it from scratch. And he’s spending the money he’s earned for what he perceives to be the good of the country. By all accounts he has governed with some skill, apart from his dalliance with “stop and frisk.”

Could he beat Trump? Lucy says to count on it.

7 mins read in Uncategorized
Stay Connected!
Get my latest blog posts straight to your inbox!
Your information will never be shared