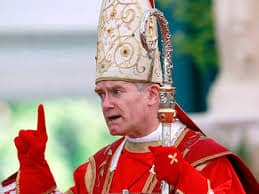 A good deal has been written about the Christian Right and its support for and influence on Donald Trump. In fact, I have written about it on several occasions. For example:

Remember my shorthand term for these people? WECs or White Evangelical Christians. They are led by the Franklin Grahams and Jerry Falwell Jr.’s of the world and they influence the actions, not just the words, of our president. Recently Trump referred to himself as the most pro-life president of all time during the annual March for Life event in Washington. He was the first president ever to attend the event. Surely no one is naive enough to believe that Trump is morally opposed to abortion.

But absolute opposition to abortion and a desire to overturn Roe v. Wade isn’t the only thing the WECs get from the self-described “chosen one”. The extremely pro-Israel group also got our embassy moved to Jerusalem, which thrilled Netanyahu. As influential as the WECs have been, there’s another Christian group that may be even more dangerous. I am talking about the Roman Catholic Right. Let’s call them RCRs. This group includes some officials close to the president. Their agenda overlaps significantly with that of the Evangelicals.

I first encountered an RCR about 20 years ago when I hired a man named Jerry Schmitt to be credit manager at my printing company. He was a fine credit man — suspicious of everyone and unafraid to ask people embarrassing questions. He was also a card-carrying member of the Society of Pius X or SSPX, which rejected efforts of the Second Vatican Council to modernize the Catholic Church.  I clearly remember sitting down at Jerry’s desk and hearing him tell me that every one of our co-workers would burn in hell. Why? Well, of course, it was because we weren’t part of the one true faith — pre-Vatican II, orthodox Roman Catholicism.

My good friend, Norman, was a Jew so, of course, he was damned. Ditto for me, an Episcopalian. But, most interestingly, Jerry Schmitt’s officemate, an observant Roman Catholic named David, was also doomed to feel the flames because he wasn’t orthodox enough. Among other failings, David attended English language masses, where the priest faced the congregation and everyone received the sacrament. What an abomination of the true faith! Jerry brought me books to read to try to convert me. They were horrifying and openly racist.

To be sure, Jerry was extreme in his brand of Catholicism, part of an identifiable subset of Roman Catholics opposed to most of the reforms of Vatican II. They adhere to a strict set of orthodox doctrines and believe that one must accept all of them or be damned. For example, I asked Jerry if one could question the doctrine of the Assumption of Mary and still be judged a Christian. Of course not,  he said.

Members of the RCR are very judgmental. One could call them pharisaical. And their judgments range from matters of doctrine (transubstantiation, Marian doctrines, papal infallibility, etc.) to matters of everyday life. The latter category includes abortion, birth control, gay rights, religious liberties and, of course, same-sex marriage. They are not to be confused with the U.S. Conference of Catholic Bishops, which can be quite liberal in some areas such as labor policy, income inequality, and the death penalty. The RCRs think that that body has gone astray as has Pope Francis, whom they consider a dangerous radical revisionist.

So how have RCRs influenced our government?

There is an organization in Washington called The Catholic Information Center. It is, according to an article by David Rohde in The New Yorker, “a hub for Washington’s influential conservatives.” One of those conservatives is Attorney General William Barr. Another is the president’s White House lawyer, Pat Cipollone. Both have served on the board of the Catholic Information Center, as has a man named Leonard Leo, the executive vice-president of the Federalist Society. The influence of these men, all members of the RCR, on President Trump is impossible to overstate. He basically ceded to them the job of stacking the judiciary with judges that only an RCR or WEC could love. This link explains this succinctly.

We are seeing, in real time, the consequences of electing a person with no moral or religious grounding. It is perfectly obvious that Trump’s brain is a morals-free zone, a vacuum just waiting to be filled by anyone who gets his ear. And people like Barr and Cipollone have his ear. People like Franklin Graham have his ear. These people represent the sort of religious extremism that is pushing young people toward atheism. And who can blame them? If the choice in Christianity is joining Opus Dei or attending some WEC mega-church, I would vote for neither.

But that isn’t the choice! People such as Jim Wallis of Sojourners, Presiding Bishop Michael Curry of the Episcopal Church, or Sen. Cory Booker can explain eloquently how Christians can act positively to build a just society that respects every human being. But the people who have our president’s ear, who are filling his vacuous brain with their sort of exclusive religion, are RCRs (chiefly Barr and Cipollone) and WECs (notably Secretary of State Pompeo).

When we think about keeping church and state separate, we usually think of religious symbols in courthouses or prayers before football games. But we’re seeing in the Trump presidency how religious extremists like Barr and Pompeo can influence a president who is without morals or religion. He has something they want — power to make the country over into their definition of a “Christian” nation, starting with the judiciary. And they have something Trump wants — the political heft to confer legitimacy on his actions and provide cover for his most egregious sins in office.

It’s not hard for me to decide whether Pompeo or Barr is more dangerous. Having a fat sycophant flying around the globe talking about Trump’s great leadership and vision is absolutely nauseating. But having a cabal of Opus Dei members (although Barr denies such membership) deciding who our federal judges will be for the next several decades is more frightening. Pompeo will be gone, along with Trump, sooner or later. The judges will be there for life.

7 mins read in Uncategorized
Stay Connected!
Get my latest blog posts straight to your inbox!
Your information will never be shared