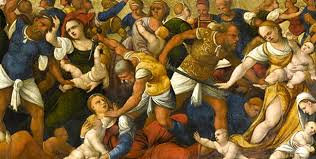 While I try  to orient my life around the church calendar, I sometimes lose track of lesser feasts and fasts as I am spun ’round in the whirlwind of secular life.  The day I wrote this post a very secular habit — reading op-eds in The New York Times — reminded me that it was the 4th day of Christmas, the Feast of the Holy Innocents. It’s the day during each Christmastide when the slaughter of the male infants of Bethlehem at the hand of Herod is commemorated. (See Matthew 2:16) Fittingly,  The Times op-ed page carried a most thought-provoking piece, “On the 4th Day of Christmas, They Came for the Babies.” Written by The Rev. Esau McCaulley of Wheaton College, you can read it here: https://www.nytimes.com/2019/12/27/opinion/christmas-feast-of-innocents.html

I found one paragraph in McCaulley’s piece arresting:

“The church calendar calls Christians and others to remember that we live in a world in which political leaders are willing to sacrifice the lives of the innocent on the altar of power. We are forced to recall that this is a world with families on the run, where the weeping of mothers is often not enough to win mercy for their children. More than anything, the story of the innocents calls upon us to consider the moral cost of the perpetual battle for power in which the poor tend to have the highest casualty rate.”

Who are the innocents of this just past Christmastide? One doesn’t have to think long or hard to come up with a list. Among the literally countless possibilities, four immediately come to mind:

Yemen’s slaughtered innocents — perhaps as many as 100,000 in the past year and a half — are non-combatant civilians killed in the crossfire between the Iranian -backed Houthis and the Saudi-led coalition. The war is fueled by arms from the U.S., where the Trump Administration and its Republican allies in Congress have fought hard to keep weapons flowing. The British are also complicit in this near genocidal enterprise.

Worldwide condemnation of this senseless proxy war has done almost nothing to stop it. The riches of Saudi Arabia and the cupidity of its western allies is simply too much for the forces of compassion and peace to overcome. For more on this,  see my post on Oct. 9, 2018, entitled “Misplaced Outrage.”

I laid all of this out in more detail in a sermon on World Refugee Week in 2018. I said, in part,

“Now, a few facts are in order, and I need only deal with the Syrian refugee population to illustrate the case. The U.N. counts official refugees as defined earlier. Again — people who have crossed an international border, registered with the UN, and requested resettlement in another country. Twenty-two million persons meet these conditions worldwide; among them are 6 million Syrians. Most are in refugee camps in Turkey, Jordan, and Lebanon. More than half are children. Germany and Sweden have taken in the most Syrian refugees — 300,000 and 100,000 respectively.  The U.S., by comparison, has cut its target for accepting refugees from all countries by more than half for this fiscal year. We say we will admit a total of 45,000 refugees of which 10,000 could come from Syria. As of mid-April, we had admitted 44 Syrian refugees compared with 6,000 the year before during the same 3½ -month period. So a change in the White House reduced our willingness to accept Syrian refugees by over 99 percent. The Trump Administration has effectively slammed the door on Syrian refugees. Executive orders regarding enhanced vetting of refugee applicants has effectively cut off the flow. This is not an accident.

Refugees coming to the U.S. are largely sponsored by churches and faith-based organizations.  There is abundant evidence that we, as a country, are rather good at assimilating refugees; we are good at welcoming. But we cannot welcome refugees our government refuses to admit. Several governors have compounded the cruelty of the Trump Administration, refusing to allow any Syrian refugees to relocate in their states.  I cannot understand how a Christian or a Jew could take such a stance.”

Why am I including this group among the innocents even though they aren’t violently attacked, forcibly separated, or displaced? Because they are victims of economic violence. The government chooses to keep minimum wages low, large corporations choose to pay low wages and hire part-time employees who are ineligible for benefits. The legions of the working poor are imprisoned with no release date in sight.

In each of the four cases, and in many others, it’s not hard to identify the Herod or Herods. The rich and powerful get the results they want. The poor are victimized. The church has chosen to remember the Holy Innocents who lost their lives to an ancient tyrant. We would do well to recognize the many innocents of 2020 whose lives are crushed by the unholy alliance of corporations and governments ruling our modern world. Prominent voices shout this in the public square, notably Sens. Elizabeth Warren and Bernie Sanders. They are called “too far left” because they focus on the innocents rather than maintaining the status quo for the powerful.

Does a person who preaches this message have a chance to beat Trump? The answer to that question will tell us a lot about the soul of our nation.