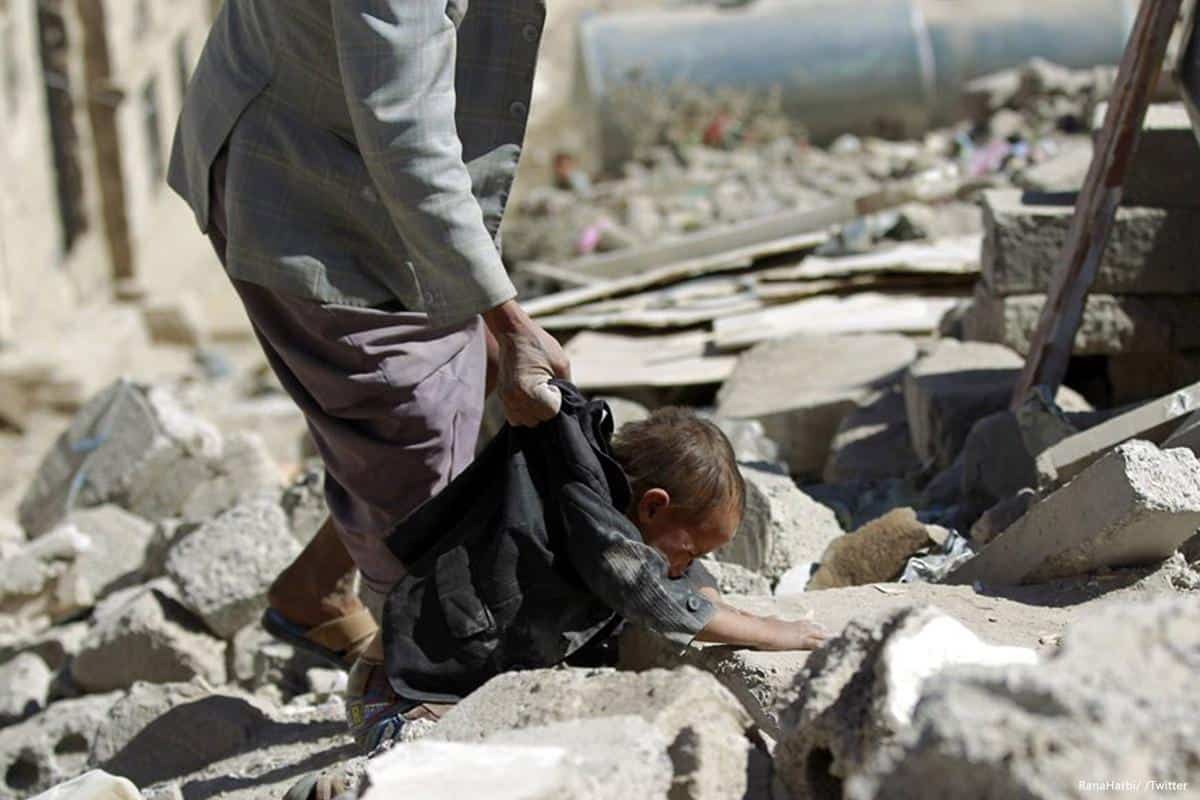 It is the morning of Sept. 28, 2018. Yesterday the nation watched the Senate Judiciary Committee grill Dr. Christine Blasey Ford and Judge Brett Kavanaugh and resolve exactly nothing. Now half the country is outraged at the prospect that Judge Kavanaugh will be confirmed and the other half is outraged that he might not be. We are awash in outrage.

I was glued to the hearings that day, but for diversion during some of the less interesting parts of the hearing, I picked up a copy of The New York Times. There I saw on the Op Ed page a horrific photo of two emaciated legs protruding from a diapered body. The headline of the accompanying column, written by Nicholas Kristof, was just as attention-grabbing: “America Helped Starve This Child.”  If you didn’t see this piece, here is the link. https://www.nytimes.com/2018/09/26/opinion/yemen-united-states-united-nations.html

Kristof, who in my view is the conscience of the country in the world of opinion writers,  juxtaposes our outrage over domestic politics with the outrage we should feel about our country’s complicity in war crimes. What should outrage us more? That our country is about to put another male, white, right-wing elitist on the Supreme Court or that our country is making money off the business of killing Yemeni men, women, and children?  As repugnant as the first option is, the latter is worse.

Let’s consider who is profiting from the war being waged by Saudi Arabia and the United Arab Emirates on the Yemeni people. While we are not the only country supplying planes, bombs, and missiles to the Saudis and Emiratis, we are by far the largest supplier. France and the United Kingdom are also complicit,  while other arms-supplying countries (Spain, Germany, and Norway, for example) have cut off sales to the Arabs because of the slaughter in Yemen. Here are the total arms sales from 2014 to 2017 to Saudi Arabia from the three largest suppliers, according to Forbes magazine:

I won’t comment on the U.K. and France since I am not a citizen of either country. As for the U.S., where I am a citizen, I will concentrate on one company and some of its leaders, who have had much to gain from our arms sales to the Saudis and Emiratis —  Raytheon. I have picked Raytheon partly because I read an article in Salon that I will share below and partly because I pass a giant Raytheon plant many times a week on my way to my parish in Newport. I could just as easily have picked Lockheed Martin or, maybe, Boeing.

Raytheon is at the forefront of our complicity in Yemen, along with Lockheed Martin. Raytheon is No. 3 among arms dealers in the country. Lockheed Martin is No. 1; Boeing, No. 2. According to the Stockholm International Peace Research Institute, Lockheed Martin’s arms sales in 2015 totaled $36 billion, with a profit of $3.6 billion. Raytheon had sales of $22 billion and a profit of $2 billion the same year.  Billions of dollars in profit are powerful motivation for war-making. Dwight Eisenhower warned us about this but we have ignored his warning. See https://thequixoticdeacon.com/current-events/like-ike-no-longer.

Companies like Raytheon are part of the backbone of the military-industrial complex that President Eisenhower warned us about so eloquently decades ago. Such companies live in a symbiotic relationship with the Department of Defense and award lucrative board of directors seats to retired military leaders who once purchased their weapons. Talk about conflicts of interest!  Five of Raytheon’s board members came from the top ranks of the Pentagon. One of them, Stephen Hadley, is the epitome of the Republican hawk. Hadley built the case for attacking Iraq based on erroneous claims relating to weapons of mass destruction. As the hawkiest of the hawks, he is the perfect person to sit on Raytheon’s board. Each board member earns about $300,000 a year. Retired military big shots held in high regard by weapons manufactures are handsomely compensated.

Raytheon paid its CEO, Thomas A. Kennedy,  $25 million in 2017. Kennedy also owns more than $12 million of Raytheon stock. The company’s four top vice presidents made from $5.2 to $6.5 million. Is it an oversimplification to say that the more Raytheon weapons we use in Yemen and other places, the more money these guys make? Perhaps, but not much of one. If the U.S. is  supporting the war against Yemen or fighting anywhere for that matter, we are helping Raytheon’s bottom line. If we and our allies aren’t bombing anyone, their bottom line may suffer.

As Salon.com reports, the war in Yemen has been a windfall for Raytheon and its shareholders.

Returning to Nicholas Kristof’s Op Ed piece, it clearly raises the issue of war crimes — and he doesn’t do so lightly. Board members of Raytheon read the newspaper. They know they’re selling the weapons that are killing civilians in Yemen by the thousands — both directly, by blowing them to smithereens, and indirectly, by starving them to death. Who among Raytheon’s leadership has even expressed remorse? No one that I know of. Our country still supports the Arabs in their war on Yemen and still justifies it on geopolitical grounds relating to our opposition to Iran. And you can bet your last dollar that Raytheon’s leadership is lobbying the Pentagon for more arms sales to feed the war machine of the Saudis and others around the world.

I think this whole business of weapons manufacture and sale is driven by greed, abetted by a willingness to sacrifice the lives of thousands of civilian noncombatants who happen to be mostly brown people and Muslims.

Why are we not outraged?

The Midterms – Rise Up Ye Women!