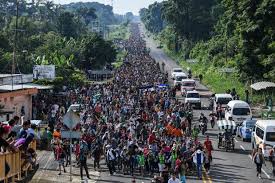 A friend of mine, Ruth Kiker, emailed me a few days ago about the “caravan” that President Trump is exploiting to whip up the emotions of his core supporters, a.k.a., his base. Ruth knew I had lived in Nicaragua decades ago and that I had majored in Latin American Studies and Economics at Tulane. She wanted to know what I thought about the caravan.

First, let’s talk about the people in the caravan. In a word, they are refugees. The caravan is a group of refugees. They are fleeing violence, poverty, and hopelessness in Honduras, one of the world’s most dangerous countries. These are mothers and fathers so desperate that they left their homes to walk 1,500 or more miles north in search of a better life in Mexico or the United States.

Any person with an ounce of compassion must empathize with these refugees. That is what people with morals do.

Yet our president, who has trumpeted his own amorality his entire adult life, sees the caravan of refugees as an opportunity to create red meat and toss it to his drooling, expectant base. What he feeds them will be lies, and the lie he repeats most is that the Democrats are responsible for the plight of these Hondurans.

Trump also has concocted a conspiracy theory — that George Soros is paying the refugees to march — and claimed that unidentified Middle Easterners are imbedded in the caravan, along with criminals bent on a reign of terror against helpless U.S. citizens after sneaking into the country. The fact that Trump offers no evidence to support his claims doesn’t seem to matter, either to Republicans at large or to his base — the 35 percent of Republicans who back Trump, no matter what.

The liar-in-chief masterfully spins out a narrative that galvanizes his base: We’re under attack from the south by millions of lawless brown people who will steal our jobs, deal drugs, rape our women, live on welfare, etc. To repulse the horde, he says we need a tough guy who doesn’t mince words — him.

To illustrate his grit, our president vows to cut off our “massive” aid to the Central American countries from which the refugees hail. Calling it “massive” is yet another lie underlying his propaganda scheme. In 2016, the latest year for which data is complete, total U.S. foreign aid to was about $43 billion, of which $10.4 billion went to foreign militaries. Honduras received about $127 million or just under .3 percent of the total. By comparison, Israel received slightly less than $3 billion, or 7 percent of total U.S. foreign aid; Afghanistan received a whopping $4.5 billion, or just over 10 percent. We usually spend a lot in countries we are occupying.

No less a Republican star than Newt Gingrich has declared that the twin pillars of the Republican message for the midterm elections are Kavanaugh and the caravan. No need to discuss our new associate justice now; we fought the good fight and lost. As for the caravan, Trump and his minions once again display their moral bankruptcy by stirring up fears about a ragtag group of Hondurans who won’t get into the country anyway. In Trump’s means-justify-the-end way of thinking, it’s OK to tell lies as long as it hardens support for Republicans in the midterms.   It’s never dawned on them that it might be more effective — and certainly more compassionate — to use our non-massive aid to make Honduras a better place to live, to make shuffling for months through Guatemala and Mexico to the U.S. unthinkable. Instead, our pathetic leader and his administration are demonizing the victims of poverty and violence. They are trying to convince voters that they and only they can protect us from the grave threat posed by the caravan.

It’s so preposterous that  I suspect there’s something else at work here other than fear-mongering. And there is. It’s racism. The people of the caravan are brown and they speak Spanish. Let’s just say it: Millions of Americans have a visceral negative reaction to Latinos. And the Republicans are gleefully playing on this prejudice. Trump’s top immigration advisor, Stephen Miller, has been working overtime to demonize Latinos since he was in high school in Santa Monica. To people like Miller and Trump, making people fear and loathe certain immigrants is good politics. Their base loves it. It works for them.

One hopes, perhaps unrealistically, that come Nov. 6, enough Republicans who haven’t been brainwashed by Trump will cross over and help Democrats carry the day. Those voters will reject Republican dogma that the caravan is encouraged by our open borders which, of course, are far from open.

The caravan is a symptom of a larger, underlying problem having nothing to to with border security, but everything to do with the abject poverty and violence of life in Honduras. As long as life there remains so difficult, people will be tempted to risk all to journey to a relatively safe and prosperous place where most would become productive citizens. But because we’re not going to welcome these refugees, at least for the foreseeable future, we face the prospect of repeated and possibly violent confrontations at our southern border.

I think there is a better approach. I think the wealthiest country in the world should share more of its largesse with countries like Honduras, working with their people to improve their lives.

But no, we instead threaten to reduce our aid and cooperation. We should be ashamed.