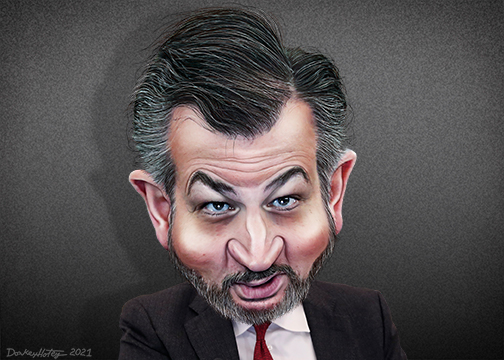 Were it not for Fitz McAden, my editor and friend of 70-plus years (yes, we played together as toddlers!), I might have missed this story from today’s New York Times. Court decisions about campaign financing don’t stand a chance of being noticed amid headlines about Ukraine, this week’s multiple mass shootings, the Roe v. Wade upheaval, and the beginning of primary season in places like Ohio, Pennsylvania, North Carolina, etc.

Where would campaign financing rank on the American electorate’s list of priorities? Alas, I fear it wouldn’t make the top 20. Who really cares anymore?  Here’s the article that Fitz made sure I read.

It is well nigh impossible for me to write about any issue involving Ted Cruz without going off into frothing, overwrought descriptions of the loathsome man himself. I know I shouldn’t engage in ad hominem attacks, but he makes it so damn difficult not to. I tell myself I’m made of stronger stuff and try not to stoop to his level of name-calling. But allow me this one exception: Cruz has been called the most disliked U.S. senator in the upper chamber by many of his fellow senators. Here’s a neat summation of how they and others feel about him.

Now, let me summarize the Supreme Court’s ruling on a campaign finance issue that’s not at all as arcane as it seems, and how Chief Justice Roberts and the Solid 5 Republican justices justified it.

Before Monday’s ruling, a candidate could lend his/her campaign organization any amount of money from his own resources. The loan could be repaid in full using campaign donations made after the election, so long as it was repaid within 20 days afterward. If the loan wasn’t repaid within that 20-day period, however, no more than $250,000 of the post-election contributions could be used to repay the candidate. Here is an illustration:

Before the Supreme Court ruling for Cruz:

A candidate running for reelection lends $1 million of his own money to pay for campaign expenses. He wins reelection. He can repay himself the $1 million, using post-election contributions, so long as he does so within 20 days following the election.  But after the 20 days, the most he can repay himself using post-election campaign donations is $250,000. So he would be out $750,000 of his own money.

The same candidate loans $1 million to  his reelection campaign. He wins. Now, however,  there’s no limit on how long after the election post-election contributions can be used to repay himself. It no longer matters when he pays himself back with post-election donations to his campaign. You, a supporter, could send his campaign organization a big check years later and the next stop for your check would be his pocket.

The majority ruled as it did, in Chief Justice Roberts’ words, because the law that was overturned “burdens core political speech without proper justification,” thus violating the First Amendment.

Writing for the three dissenters, Justice Elena Kagan wrote, “Repaying a candidate’s loan after he has won election cannot serve the usual purposes of a contribution: The money comes too late to aid in any of his campaign activities. All the money does is enrich the candidate personally at a time when he can return the favor — by a vote, a contract, an appointment. It takes no political genius to see the heightened risk of corruption.”

Chief Justice Roberts dismissed this concern “with a measure of skepticism.”  Think about that for a moment. Justice Roberts doesn’t think the decision will make corruption easier or more likely. A hypothetical case is useful. Here’s mine.

Prominent Louisiana entrepreneur Robert “Bubba” Miles decides he will run for Congress. To kick start the race, he loans his campaign organization $1,000,000. Since he runs as a Republican, he wins easily in his Deep South state. But his campaign spent all its cash to make it happen, so Bubba’s loan can’t be repaid within 20 days of the election. Upon assuming office in January, Bubba begins meeting with a parade of lobbyists who are cozy with the Louisiana delegation and who need support in Congress for their pet projects. First up is James “Jimmy G” Garfield, who lobbies for the NRA. After impressing upon Bubba the evil of universal background checks, Jimmy G inquires about the balance in Bubba’s campaign coffers. He remarks that it’s a shame that the campaign can’t pay back Bubba’s personal loan to his campaign made months earlier.

Not a problem, says Jimmy G, a skilled bundler of campaign contributions. He tells Bubba it just might be possible to get some like-minded folks to donate to Bubba’s campaign now that he has won, enabling Bubba to recoup the money he loaned his campaign.

Weeks later, miraculously, Jimmy G has bundled $100,000 in $2,900 donations. Bubba’s campaign writes Bubba a check for $100,000, which he spends on a new Porsche SUV for Mrs. Bubba so she can navigate those  pot-holed New Orleans streets.

As Jimmy G walks out of Bubba’s office with a self-satisfied grin, he passes another lobbyist on his way in — William “Oily Bill” Barrett, representing Louisiana’s Oil and Gas association.

And so it goes.

Justice Roberts pointed out that the $2,900 limit on donations to a campaign would still be in effect. He opined that this would make corruption unlikely. That argument ignores the fact that lobbyists bundle $2,900 contributions and deliver them to campaigns. The lobbyist, not the individual donor, becomes the go-to guy — the person with the pull, on whom the elected official depends for big contributions.

Did Justice Roberts deliberately ignore political reality or is he ignorant of it?  No knowledgeable person believes that the $2,900 limit eliminates influence peddling in politics.

My hypothetical is all too plausible. Nothing about it would be illegal now that the high court has found for Cruz. It’s simply an expansion of our sleazy system of campaign financing. Another bell and whistle on the engine that powers our plutocracy. And all this in the name of free speech. Such gross hypocrisy. Expect a lot more of it from this court.

I have repeatedly recommended a book, Democracy in Chains, by Nancy MacLean. It lays out how the libertarian right wing, led by the Kochs and others of their ilk, planned over decades to gain control of our democracy via the Republican Party. They have not been venal fools like the Trump crowd. They are smart people who have a long view and tons of discipline. The court’s decision, like Citizens United, is another victory for them, for The Federalist Society, the Cato Institute, and the Heritage Foundation. They’re gleeful that their  plan is working.

Few people have more scorn than I for wacko conspiracy theories. But what I am pointing out — this plan to control what’s left of our democracy — is not just a theory. It is a well documented, historical fact that’s unfolding before us, and Democracy in Chains will equip you to understand it. I recommend, again, that you read it.

The Coddling of the Morbidly Rich