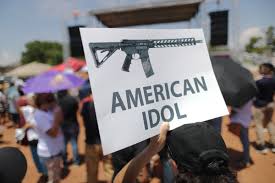 Another 21 innocents have been slaughtered in our “great country,” sacrificed on the altar of gun manufacturers’ right to maximize profits. This sacrifice was enabled by the gross corruption that characterizes our political system, which allows companies that make weapons of death to buy loyalty through their powerful lobby, the NRA. So don’t make the mistake of thinking those little school children died for something other than the greed of gun makers and the mendacity of Republican politicians. That’s what killed them. When President Biden last night cried out, “When in God’s name will we stand up to the gun lobby?”, he affirmed exactly what I am saying.

Biden also said, “Where in God’s name is our backbone.” Indeed, where? The lack of it is evident in our determination to nurture the gun culture that defines us as a nation. We are a violent nation — read our history. And our violence has always been aided and abetted by the latest weaponry. Gun sales this March were at the second-highest monthly level ever recorded. We came close to equaling sales in  January 2013, the month after the Sandy Hook massacre. Gun lovers, fearful of losing their right to own human-killing automatic weapons, rushed into gun stores in droves to stock up. There was no reason for the panic buying, of course, because the Republican Party had their backs. Buying an AR-15 is just as easy now as it was before Sandy Hook.

While politicians, and even some well-meaning people, mournfully intone the meaningless words, “Our thoughts and prayers are with the families of the victims”, the National Rifle Association is preparing for its annual convention in Houston. Texas Gov. Greg Abbot and Ted Cruz, the state’s junior senator, will speak to attendees, poster people of our gun culture. The delegates to the convention and the speakers represent the millions of people in this country who value gun company profits more than human lives. They represent people who believe anyone should be able to buy weapons made for our military to maximize killing power as well as all the ammunition needed to kill quickly and efficiently. They universally cite mental illness as the cause of mass shootings as if other countries, where gun deaths are rare, have no mental illness.

I despair of the notion that the Republican Party will repent. They will again go in the opposite direction. But is it not possible for our other party to shine a much brighter light on the evil of their policies, to shame them as they deserve to be shamed? I reject entirely the idea that reasonable people can differ on enacting common-sense gun-control legislation.

Reasonable people are again horrified and ashamed by our country’s violence. Reasonable people know that a society where gun ownership is the highest in the world will have more gun violence than civilized nations which have far fewer. Can’t the Democrats single-mindedly make gun control legislation their mission? If they shy away from a frontal assault on the gun lobby, they don’t serve anyone’s vote.

Finally, I do have some thoughts and prayers. I think that the NRA Convention should be very well attended this weekend. And I pray that the uninvited attendees, united in their rejection of everything the NRA stands for, disrupt the convention and make attendees squirm. Mass movements can affect policy; think of the Civil Rights movement in the ‘60s. We desperately need a mass movement, reinforced  with civil disobedience when necessary, to fight the good fight against merchants of death and their supporters.

A Victory for Cruz