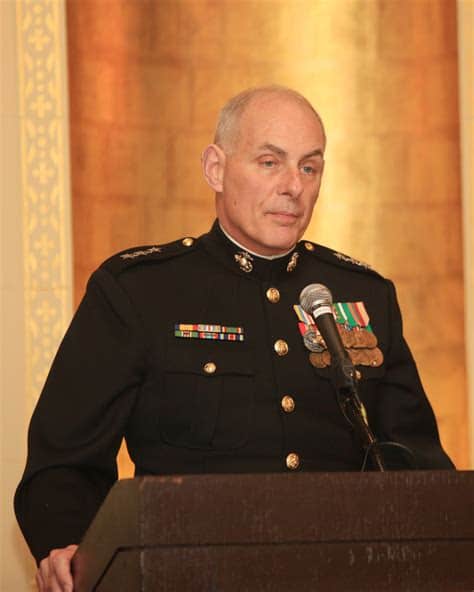 When Marine Corps Gen. John Kelly was appointed chief of staff by our current president, the swooning was almost universal. Both Democrats and Republicans agreed that if anyone could bring order to the Trump White House, Kelly could. This was partly based on Kelly’s no-nonsense reputation and partly on many Americans’ knee-jerk reaction to men in uniform.

We confer on them, automatically, not only the quality of discipline, but competence and even-handedness as well. In this age of perpetual war — Eisenhower’s warning about the “military-industrial complex” has been unheeded — one simply doesn’t criticize a man in uniform, especially one whose son was killed in action in Afghanistan. We also thought Kelly could change Trump from an irresponsible and immoral buffoon to some less destructive species, and  impose order on a White House riven by in-fighting and chaos.

But hardly anything has changed since Kelly’s arrival, so it’s a good time to take a longer look at him.

One reason Trump tapped Kelly as chief of staff was that Kelly had done his bidding at Homeland Security with regard to immigration. Shortly after his  inauguration, Trump issued an executive order reversing an Obama administration policy that effectively protected undocumented, law-abiding immigrants from detention and deportation. Trump thereby figuratively speaking, took the gloves off Immigration and Customs Enforcement agents. Dara Lind, writing for Vox.com, put it this way: “Kelly’s management success as head of DHS … is simply that he allowed immigration agents to do what they wanted: arresting whichever unauthorized immigrants that they happened to find.”

It works this way: ICE agents who are looking for a criminal (often someone convicted of drunk driving or another misdemeanor) invade a home and check on everyone there, arresting anyone who is undocumented. Currently they are targeting 7-Eleven stores in California. The United Farmworkers Union has warned its members to avoid 7-Elevens. The purpose of the administration’s policy is clear — to send a message to every undocumented immigrant that they could face arrest and deportation at any moment.

Here is a man cast in the military mold, dutifully carrying out Trump’s orders to make life miserable for undocumented immigrants. Kelly’s then-deputy and successor at Homeland Security, Kirstjen Nielsen, has loyally followed in his footsteps and continued to allow ICE agents to round up anyone they happen to encounter who is undocumented.

According to a CNN poll taken in March 2017, almost two-thirds of Americans favor a path to legal status for undocumented immigrants as opposed to deportations. It’s my understanding that polling over the past year has consistently shown this. So, harassing and deporting undocumented immigrants is not the will of the people but simply playing to the minority of the population and to elected officials who have real animus toward immigrants, as their leader appears to have.

For readers who don’t know any undocumented immigrants, let me explain how taking the gloves off ICE agents affects them. I was the deacon on the staff of St. George’s Church in Central Falls, RI. Our parish was Hispanic and our masses were all in Spanish, since Central Falls, the poorest city in Rhode Island, is majority Hispanic. Our senior warden was a woman who’d immigrated from Guatemala 20 or so years before. She and her husband had jobs and their two sons, born in this country, were in school and doing well. She was and is, in every way, a pillar of her community. But she and her husband are undocumented. Under Obama, she had little to fear from ICE agents and began the process of applying for a green card. which takes years and costs thousands of dollars to obtain. Now, she lives in fear that, by being in the wrong place at the wrong time, she will be swept up in an ICE raid and deported. She is justified in her fear.

This is a real  tragedy because no moral person could want this woman deported. But Gen. Kelly and Kirstjen Nielsen endorse policies that put her at serious risk. And they do so because they are loyal to our president, even if it causes cruel and cold-hearted treatment of fellow human beings.

We now know that Gen. Kelly didn’t change Trump for the better. As a matter of fact, he didn’t change him at all. And there is ample reporting showing that Kelly has developed a fierce loyalty to his boss. That shouldn’t surprise anyone. He is a loyal Marine and Trump is his commander. So he is highly unlikely to be a force for good unless he does something noble — like resign.

For most of our history we have had a healthy skepticism about having military men in positions of power in the executive branch. Trump turned this upside down, prefering to surround himself with military men. And why would that be? Could it be because they will follow his orders slavishly?

Is the Quixotic Deacon being cynical?  Don’t we need to have some debate about the wisdom of military involvement in civilian governance? Now that we, as a country, have proven capable of electing someone like Trump, wouldn’t it be good to know that he isn’t surrounded by men (yes, they are always men) who always “obey orders”?

3 mins read in Current Events
Stay Connected!
Get my latest blog posts straight to your inbox!
Your information will never be shared