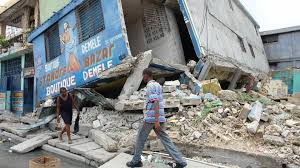 Exactly eight years ago, I was riding in a pickup on the road through the Croix des Bouquets section of Port au Prince, Haiti, at 4:53 p.m. — the moment the catastrophic earthquake of Jan. 12, 2010, began shaking the earth.  Over the next days and weeks I witnessed first-hand suffering and pain on an overwhelming  scale. The people bearing the pain and suffering were Haitians who knew what suffering and pain were all about long before the quake.

I had been working in Haiti for 40 years or so at the time and had come to know Haitians as kind, passionate, and resourceful people. That is who they are. They struggle against enormous odds to scratch out a living in the most hostile environment in our hemisphere.

Of course, yesterday our president consigned all Haitians to one category —  unwanted people from a “shithole” country. While I already despised everything about Trump — his narcissism, his lying, his bragging, his silly hair, his nativism, and, yes, his racism and misogyny — he has now made it personal. He has thrown the brave Haitian people under the bus so that the unreconstructed bigots among his loathsome “base” can once again say, “attaboy”.

I know that the few people reading this probably are as angry as I obviously am about this latest outrage against decency. It is hard for me to think know how to respond. All my senators and representative (Messrs. Whitehouse, Reed, and Cicilline) are already on record opposing Trump. Sen. Whitehouse is a leader in this regard. So haranguing them would be pretty useless.

But if you live in a state represented by Republicans in Congress, you can do something. Demand that they specifically and emphatically repudiate the comments made by their president. Send them emails over and over again making this demand. Tell your friends to do the same. Speak out and act out against our racist President.

There’s a sad and profound irony in the timing of Trump’s latest repugnant slur  that I hope is not lost on our nation: This is weekend when we commemorate the legacy of Dr. Martin Luther King Jr.

5 mins read in Income Inequality
Stay Connected!
Get my latest blog posts straight to your inbox!
Your information will never be shared