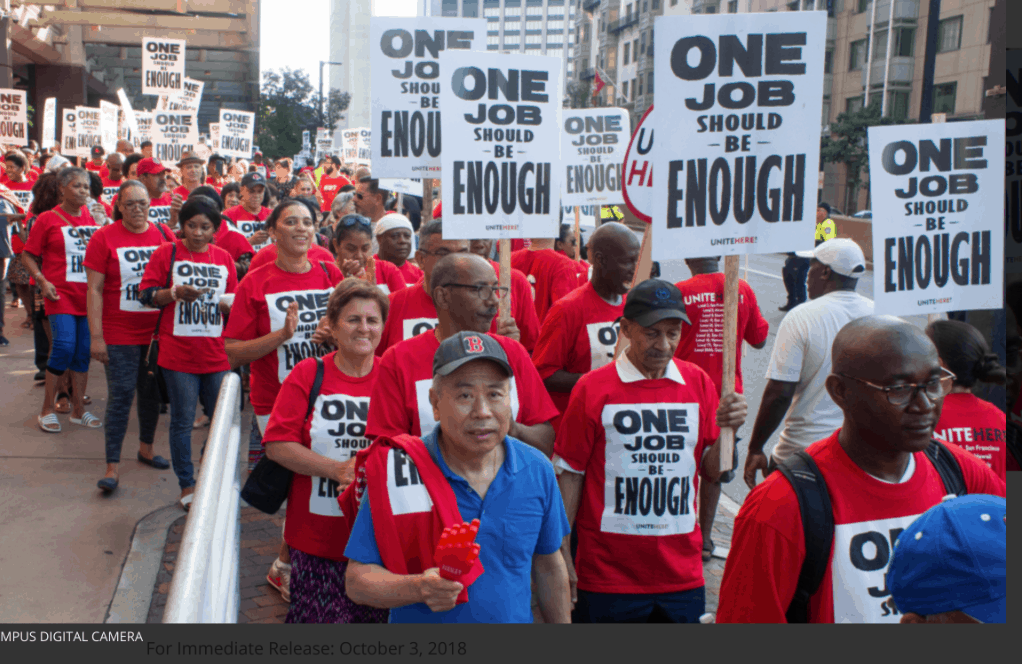 When I think of the working poor, the image that comes to mind is the housekeeper in a hotel chain who I pass in the hallway on the way to or from my room. Housekeepers are usually female and women of color. Their work is hard physically and can be demeaning because guests often treat their hotel rooms differently from their homes, thinking that “the maid will clean it up.”

So years ago I began to fight back, in a tiny and rather pathetic way, on behalf of these underpaid and underappreciated women by simply seeking them out and giving them $20 everyday I stayed in a hotel.

My friends, this is not the best way to help these members of the working poor. But it is better than doing nothing at all.  And, if you think their situation was dire in 2019, just look at it now post-pandemic. Things have changed — for the worse.

During the pandemic hotels stopped the usual daily room cleanings. They only cleaned rooms on the day a guest departed. This enabled them to cut housekeeping costs significantly. Yet with occupancy rates recovering, laid-off housekeepers remain largely unemployed. The Guardian reported on June 5 that about 65 percent of the members of Unite Here, the US hospitality industry’s largest union, remain unemployed. Why is that?

The answer is outlined in the same article.  Here is a link:

So what began as a temporary measure during the pandemic  — sharply reduced housekeeping staffs — has become permanent. Hotel chains are cutting expenses by ending daily housekeeping or making it an add-on option. Unite Here estimates this will eliminate 180,000 housekeeping jobs  nationwide. Those left jobless will be, overwhelmingly, black and brown women.

Moreover, as the article describes in detail, housekeepers who are called back will work significantly harder because guests will have gone three, four, five or more days without housekeeping. Think full trash cans, dirtier towels and linens and messy bathrooms. It will take twice as long to clean a room as before. And, if you think the extra work will force hotels to bring back workers laid off during the pandemic, think again. Not many workers will return because fewer rooms per day will be cleaned. But the lucky ones who are called back will have tougher jobs than before — by far.

The CEO of one giant chain, Hilton Worldwide Holdings, says the housekeeping staff cuts at the company’s hotels will become permanent —  bad news obviously for those who depended on their pay, meager though it was. By contrast, that CEO’s total compensation last year soared 161 percent while median pay for his employees dropped 34 percent. The CEO earned $55 million in 2020. And each of Hilton’s board members earned a minimum of $270,000 for attending a handful of meetings during the year — probably on Zoom from the comfort of their homes. The lead director earned an extra $75,000, chairs of board committees $20,000 to 30,000 extra, and committee members $10,000 to $15,000 more.

So despite the pandemic, pay for Hilton’s top executives and directors turned out to be quite lucrative.

I’m only picking on Hilton because it’s one of the biggest chains and its numbers are easily accessible. It’s hardly the only hotel operator I could use to make my points.

Am I missing something that excuses all this? That makes it OK? Or is this yet another example of our modern US style of capitalism, where the wealthy get wealthier at the expense of the poor? It isn’t an under-the-radar  conspiracy; it is our way of life, practiced out in the open. We’ve settled comfortably into an economy of stark inequality. We can change if we have the will, but that will is sadly lacking on a national level.

What must happen for things to change for the good? At a minimum, here are some steps we must take:

The last item is the most important and would make me happiest. If shareholders (and I mean mostly large institutional ones that have the most power) would exercise their power to increase the incomes of the lowest-paid wage earners and also reduce compensation for top executives and directors, I would invest in those companies. They would prove that they are more empathetic than other companies.

With such an action plan, we as a nation could be proud — and I could quit beating the drum about rapacious capitalism.

In the meantime, I plan to demand daily housekeeping in hotels. If enough people do the same, hotel companies will take note. I will continue to search out the housekeeper on my floor, look her in the eye, and thank her for her good work as I hand her my $20 bill. Lucy, my wife, does exactly the same except she extends the practice to many other low-wage workers she encounters.

The key to making this a warm human interaction — not just some sort of automatic noblesse oblige gesture — lies in eye contact and the message. And while it’s meant as a genuine act of gratitude, it’s also a poor substitute for actually empowering workers, which we desperately need to do if we’re ever to live up to our grandiose claims of greatness and magnanimity.

7 mins read in Climate Change
Stay Connected!
Get my latest blog posts straight to your inbox!
Your information will never be shared