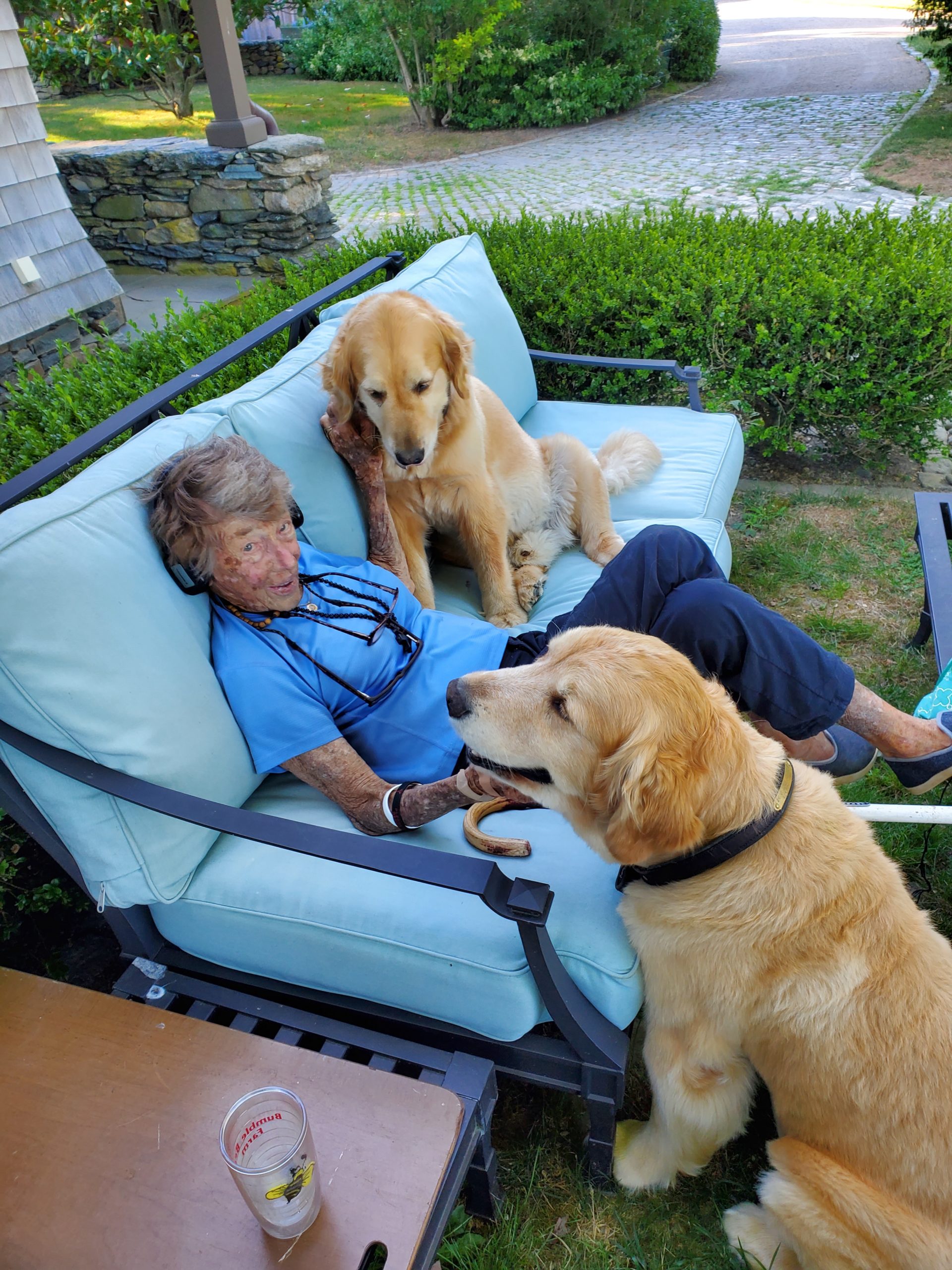 As some of you already know, my mother, Anne Springs Close, died on Aug.  20 after nearly 96 years of a very active life. She was in full possession of her mental acuity. However, her body was unable to withstand the violence of a fallen tree limb that trapped her and my sister, Gracie, for more than 90 minutes. Her undoing was a fluke of nature — perhaps a fitting end for a person who deeply loved the natural world and being out in it.

I’m appending  to this post the words I spoke at her memorial service.

Mother profoundly influenced the way I viewed the world. The older I got, the more my views aligned with hers. I’m not saying we were in sync on every political or societal issue, or even on some of the larger ones. Indeed, I probably lean more to the left on some issues than my mom, who remained loyal to what I would call the established Democratic Party. But on the most consequential issues — honest, forward-looking governance; equal justice; environmental protection; benevolence toward the less fortunate — we shared a set of biases. I mean “biases” in the best sense of the word: a predisposition toward ideas, beliefs, and actions too often dismissed as “too liberal.”

We shared a bias against using military might to intervene in other countries’ affairs. In fact, Mother was more anti-war than I was until the very end of the Vietnam War, when I finally saw the light. She identified more with the anti-war youth of the late ’60s and early ’70s than I did at the time. History proved her anti-war bias to be wise. Yet she staunchly defended our conduct in World War II and bristled at the suggestion that dropping atomic bombs on Hiroshima and Nagasaki was immoral. We didn’t see eye to eye on that. But give her her due: She’d lived through World War II and I hadn’t.

We also shared a bias against allowing the military-industrial complex to influence our conduct on the international stage, as it does. She’d visited Yemen on one of her frequent “terror tourism” trips with my sister Francie. So when our “brave” country supplied Raytheon missiles to the Saudis so that they could prosecute their proxy war with Iran in Yemen, she was as outraged as I was. Making money by making war was as deeply offensive to her as it is to me. She took Dwight Eisenhower’s warning seriously while leaders of both our country’s political parties have ignored it for the last 60 years.

Mother always hated the trappings of wealth. As my brother-in-law said in his eulogy, “She was born with a silver spoon in her mouth, but she spit it out as soon as she could.” This was a visceral feeling with her. And while no one is completely consistent in conforming their life to their values, she was pretty damn consistent about this. Limos, fancy hotels and first-class seats made her skin crawl.

I remember sitting  beside her at a fancy dinner in New York with the Springs Industries board of directors once. It was a command performance, so she went. A lady who I won’t name was particularly pleased with the especially obsequious waiter at our table. She turned to him and said, “You are so good, I wish I could take you home with me to South Carolina.”  My mother almost threw up and we joked about this incident for years.

I am not sure any of us have ever lived up to the rejection of privilege to the extent she did. I’m sure I haven’t. Yet the example is there and it influences us to this day.

Finally, my mother instinctively favored the underdog. This was especially true if a family member was going through hard times. She would stand up for that person whether or not he or she deserved it. That was her nature. This bias extended to her actions outside the family. She cared for the people of Haiti —  among the world’s most unfortunate people. And she admired those who cared for them, such as the Salesian Sisters of Haiti to whom she was devoted. She was a Mets fan from the beginning because, of course, they were perennial underdogs until 1969. She allied herself with the Black Lives Matter movement and demonstrated regularly in Fort Mill last year. She also was a champion of her gender. Women’s rights were important to her and she was consistently skeptical of a society, like the one she lived in, that was dominated by white men. And, oh, wasn’t she right to be!

Mother and I spent many hours over the last 15 or 20 years with her telling me what she wanted to happen here today. So I am somewhat constrained by her wishes.  And there are many of you looking back at me at this moment who wish you could be up here talking about my mom.  And I wish you all could but….one of mother’s fears about her memorial service – perhaps her only one – was that it might “go on too long.” So, to honor her wishes we are going to hear from only 3 people today so that we “don’t go on too long.”

My mother had such a major impact on many of us. She certainly had such an impact on me. The older I got the more I realized that. That doesn’t mean that we didn’t ever disagree. However, I found that, as the years passed, my views on things more resembled hers than vice versa. I long ago decided that it was ok to boast about my mom and I did it all the time.

Mother had her strong likes and dislikes. Either despite or because of her upbringing amidst wealth and privilege, she viscerally disliked the pretentious, the privileged, the posh, and snobbery in any form. This was mostly an admirable trait. But occasionally she would so intimidate some travel agent that we would end up staying in some dump of a hotel because the agent was afraid of Mother. And Mother hated pretentious hotels. But despite her strong feelings on many things, I do believe that Mother will be remembered for what she loved.

Mother loved her kids and was fiercely loyal to each of us even when we did not in any way deserve it. I know we can all think of times that she defended a sibling who, at the time, didn’t seem to deserve defending as well as a time when she supported us when we didn’t merit support.  That loyalty and love carried on to embrace her grandchildren and great grandchildren.  She wasn’t always good at expressing her love but, to use a cliché, actions speak louder than words.

Her love of the natural world, epitomized in her love of the Greenway that bears her name, was lifelong. Under the influence of Miss Tony, or Toto, as we knew her, my mother became a true outdoors person early on. Walking in the woods that surrounds her house and the trails of the Greenway was a cherished activity for her on a daily basis for over 90 years. Late in her life, when her eyesight failed her, she still would not give up this habit. And it was only after a number of painful falls that she agreed to limit that activity to times when someone could accompany her.

She was a devoted friend to many of you here. You camped with her. You walked with her. You biked with her around the world. And some of you even went to truly unpleasant places (Mali, Yemen, Ethiopia come to mind) with her because she’d never been there and just had to go. My sister Francie was especially game in this regard.  My mother was a fan of what I call terror tourism.  She did not pass this on to me.

She was very stoic and resilient and this became more and more evident as she aged. You never heard her complain, for instance, about the arthritis that ravaged her hands over the last 30-plus. Her increasing blindness was treated as a challenge rather than a curse. She never said, why me? She just charged ahead and made the most of each day. I would pray that I could face adversity with equal grace were I to face what she did. But I know I couldn’t.

Of all the gifts my mother gave us by her example, the one I think of most often is her ability to pay no attention to the calendar. She never woke up in the morning and said, “Oh, I’m 70 now I don’t need to exercise so much” or “I am 80 now, I probably shouldn’t travel so much.” She just kept with her program and ignored her age. She knew of no other way to live. What a lesson for all of us.

My mother, though hardly orthodox and never one to wear religion on her sleeve, was devoted to her parish church, St. Paul’s. And that is where you could find her every Sunday morning at 8 o’clock when she was in Fort Mill. Yes, the woman who Jim Bakker once called a “devil woman” for buying some land he wanted, was a faithful communicant in her church. And she wanted that to be known because, of course, she would never say so.

8 mins read in Income Inequality
Stay Connected!
Get my latest blog posts straight to your inbox!
Your information will never be shared