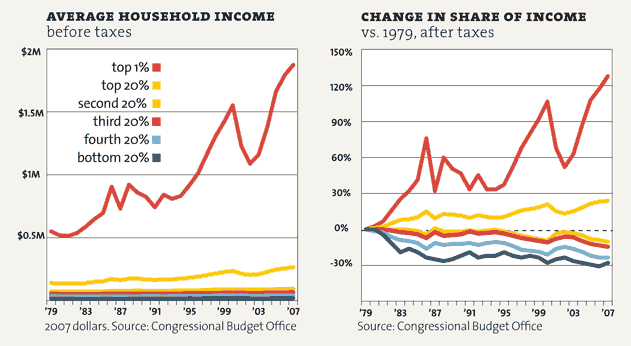 Before getting down to specific examples and some pie in the sky (quixotic?) solutions concerning my chosen topic of income inequality, I want to make a point or two about why now is the time to create a sense of urgency about this issue. There are two reasons based on the facts – i.e., US Census Data.

Anyone who consumes news from any or all of the major news outlets – print, cable, network news, etc. – will have read a great deal about the subject of increasing income inequality over the past 10 years. If you google “income inequality in the US”, you will have more reading material than you could ever read. Here are a few statistics that say a lot.

Ok, I promise, no more statistics!

What these dry statistics don’t do is to reveal the human suffering that they cause.  And the suffering is not limited to the unemployed welfare family. As Barbara Ehrenreich so vividly illustrated in her book Nickel and Dimed, in 2001, the working poor – people with jobs – have been and still are having an increasingly difficult time escaping poverty. More recently, in his book The Working Poor, Pulitzer Prize winning author David Shipler vividly portrays the life of the working poor in this country. His book was a finalist for the National Book Award and is as timely now as it was when first published. And for an even more timely assessment of the issue, you need only read David Leonhardt’s op-ed piece published just last week.

There is simply no excuse for someone who can read or hear not to know that income inequality – how we value one man or woman’s labor versus another’s – is a scandal and that it is getting worse. The facts are glaring. What is hard to determine is whether people, other than the working poor themselves, care or not. The trend of increasing inequality would, on its face, seem to say that as a nation we don’t care. But, on the other hand, the popularity of Bernie Sanders and Elizabeth Warren would seem to indicate the opposite. To state the obvious, it is my feeling that the very existence of the working poor in our rich country is a moral failure and a scandal.

In his book The Working Poor, David Shipler makes this statement: “Nobody who works hard should be poor in America.” While many, perhaps even most, people would agree with that statement, the people who have the ability and the power to make it come true, need to be held accountable for doing so. To that end, my subsequent blog posts will attempt to identify those who can do the most to help reverse this disturbing and unnecessary trend. Implicit in my analysis is the belief that large and small corporations can do much more to lift working people out of poverty by looking at how their own workers, top management and Board members are compensated. If more corporations don’t step up, then I think it is inevitable at some point, that change will be forced on them either by government or labor or a combination of both. In my next blog, I will begin with a look at our country’s largest retailer and employer Walmart.

The Drums of War