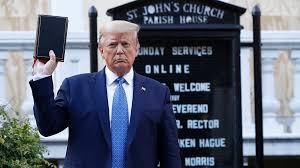 There are many good reasons not to sit down and write when you are extremely frustrated and angry. But this is my release, so I’m ignoring all those reasons to hold back and going ahead to spill my guts here on June 2, 2020.

Last evening all the damage that Trump is doing to our country was displayed in Technicolor. I’m not talking merely about the damage to the right of free, peaceful assembly that he stomped on with “overwhelming” force. That’s something Congress should deal with — but it won’t, of course, because his willing accomplices hold the Senate.

What outraged me most was his visit to St. John’s Church. It made me so angry  that I even posted my frustration on Facebook contemporaneously, as if that would help anything. I said: If our Episcopal Church does not strenuously object to one of our churches being used as a backdrop for a craven and, yes, evil political stunt by our amoral president, I will be more than disappointed. How many atheists were birthed by that video?

Shortly after I posted my cri de coeur, the Bishop of Washington made me proud with her own statement of outrage. So my fear and pessimism about how my church would react was unfounded. And I almost feel as if I should apologize for my lack of faith. Bishop Mariann Budde posted the following on Twitter last night.

We are followers of Jesus. In no way do we support the President’s incendiary response to a wounded, grieving nation. We stand with those seeking justice for the death of George Floyd through the sacred act of peaceful protest.

Thank you Bishop Budde for making me proud of my small branch of the Jesus Movement known as The Episcopal Church.

Those of you who were confirmed in the Episcopal tradition know the definition of a sacrament:  an outward and visible sign of inward and spiritual grace. The two principal sacraments of the church are Baptism and Holy Eucharist. The opposite of a sacrament in my view is a sacrilege. I looked up the definition of sacrilege this morning. Here is what I found, in part:  1. The act of appropriating to oneself or to secular use, or of violating, what is consecrated to God or religion. One of the synonyms listed for sacrilege is desecration, defined as the removal of the sacredness of some object or place, as by defiling or polluting it.

Our president, in an effort to portray himself as some sort of macho warrior-saint, cleared the streets of peaceful protesters so that he could desecrate, by his presence, a holy place of worship. The fact that he and his henchmen (all white men except for one Fox News babe-cum-press secretary) looked absurd standing stiffly in front of St. John’s facade, was some consolation. But Trump’s staff sees  things differently: Minutes ago I heard they believe that the moment was “iconic” and are excited about using the video for his reelection campaign.

How can one possibly be optimistic in mid-2020? We live in a plutocracy where the plutocrats (corporate titans all) have ceded control to an evil imbecile in order to protect and increase their wealth. They are abetted by a political party that counts nearly half our citizens as members. Were I a poor black or brown person working for minimum wage or close to it, I think I would “take to the streets.” Do we need a second American Revolution?

Or would it be our first one?  I’m reading a new book on the French Revolution titled A New World Begins. Its author, University of Kentucky professor Jeremy Popkin, is a renowned scholar of both revolutionary France and Haiti. Reading about the founding of France’s National Assembly in the summer of 1789, I noticed an interesting issue that points out a major difference between the French Revolution and our so-called American Revolution. It has to do with slavery.

When delegates from Haiti, then called Saint-Domingue, sought admission to the National Assembly, French delegates objected, arguing that the existence of slavery in Haiti threatened the very principles undergirding the revolution: liberty and equality. One delegate, Dominique-Joseph Garat, proposed that the delegates from Saint-Domingue promise that they will never oppose any effort that the Assembly may make to find ways to end this crime as soon as possible. Now the French Revolution didn’t end slavery in 1789, but it did recognize the shameful juxtaposition of slavery with the ideals of Liberty, Fraternity and Equality, and the institution of slavery in France did not survive the revolution there.

In America, on the other hand, slavery persisted — protected (because it generated wealth) for another six-plus decades after the French did away with it. Here, too, legislated segregation of races lasted well into my own formative years, and the socio-economic subjugation of people of color lingers. George Floyd’s murder is emblematic of the miasma of racism bequeathed to us by slavery, which we clung to long after other western nations abandoned it.

I pray that we will elect leaders with humility — not just personal humility but national humility. We have so much to be humble about.