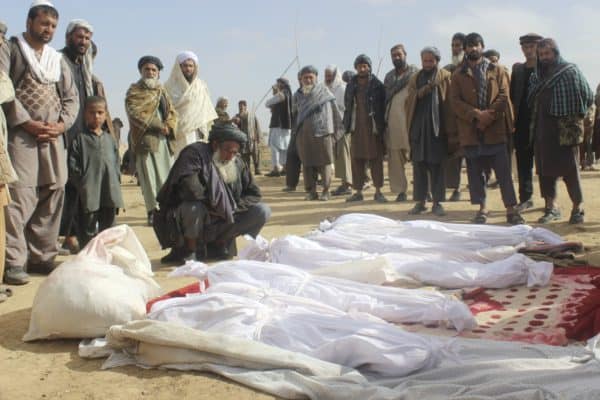 This week I was reading New Orleans’ daily paper, The Advocate, when I noticed two stories on the same page. ( If you expected me to say The Times Picayune when I said the New Orleans daily paper, let me explain. Sometime after Hurricane Katrina, The Times Picayune was sold and, later, switched for a time from publishing seven days a week to three. The newspaper based in Baton Rouge, The Advocate, then stepped in with a seven-days-a-week New Orleans edition. At that point, I switched my allegiance to The Advocate as a local daily read.)

Now back to the two articles I came across in The Advocate.

One was about three U.S. Special Forces troops killed by a roadside bomb in Afghanistan. The other was about “dozens” of Afghan civilians killed by an U.S. airstrike. In the television news coverage of the day, the only deaths I heard about were the Americans’. This is typical of the U.S. media’s coverage of death — any kind of death. When an airliner crashes halfway around the world, the media immediately focus on whether any Americans were killed. If you pay attention to the broadcast media, we as a nation seem to be relieved when we hear that only non-Americans were killed. And so it is with our wars. We are heartbroken when one of our service men or women is killed (and well we should be) but we endure any amount of civilian carnage.

Our never-ending war in Afghanistan is hell on Afghan civilians. What happened the last week in November is illustrative. According to The New York Times (see link below), 53 Afghan civilians died that week — almost 18 times as many as the three Americans.  Year to date, we have lost 13 soldiers while 2,798 Afghan civilians have been killed. So, year to date, we have lost one soldier for every 216 civilian deaths. These numbers probably don’t surprise you. It’s always someone else who disproportionately pays the price in lives for our military adventures abroad. Our experience in Iraq provides the same evidence. A study by the British medical journal The Lancet estimated that the Iraqi death toll by 2006 was between 392,000 and 942,000.  During the entire conflict 4,424 U.S. soldiers were killed in the Iraq war, according to the Department of Defense.

Does this mean that one should wish for more US soldiers to be killed to “even things out?” Obviously not. Our armed forces are made up of volunteers who willingly risk their lives to accomplish what our Defense Department defines as their mission. So when that mission is ill-defined or misguided, we are doing a double disservice: first,we are endangering our brave volunteer soldiers in a mission that may be unwinnable, and second, we are endangering many more civilians who have little or no allegiance to our mission and haven’t volunteered for anything.

Thinking citizens of the US  should be asking some questions.

The conventional wisdom (misguided as it is) about why we’re still in Afghanistan goes something like this: Our commander in chief, who shirked duty in Vietnam, said this week that his experts tell him that “If we don’t go there, they will soon be fighting over here.” What in hell does that mean? Do they really think the Taliban are going to invade the U.S.? That seems highly unlikely. But it is the kind of empty rhetoric that the military and, probably more importantly, defense contractors use to justify huge military expenditures and arms sales.

Such bogus talk doesn’t seem to bother anybody. We went to Afghanistan to find and kill Osama bin Laden. With that mission  accomplished, why do we stay?

One can only presume that we stay to save Afghanistan from the Taliban. But we have proven over the past 17 years that we can’t root out the Taliban. They are like a Whac-a-Mole game. We take back a province one year; they reconquer it the next. We don’t know how to “win” this war and we have proven it. Can we justify one more death? Why kill one more Afghan civilian or American soldier? What part of the unambiguous commandment, “Thou shalt not kill,” do we not understand?

When we invaded Iraq in 2003, I said to anyone who would listen that if one civilian was killed as a result of our invasion, then we shouldn’t invade. I realize that that sounds extreme but I said it then because I believed we had no business invading at that time. I thought the invasion was wrong.  And I believe that today as much as I did then. We did something that cost tens of thousands of lives and, in the end, birthed ISIS.

Our presence in the Middle East over the past 18 years has wreaked havoc and our bloated national ego cannot admit it.  And it is the civilian populations of Iraq, Afghanistan, and now Yemen that have paid for our macho belligerence. The military-industrial complex must have a war to fight to justify enormous budgets and arms sales.  So we stay and stay in Afghanistan. and who cares how many thousands of Afghan civilians and American soldiers are killed? We, as a nation, clearly aren’t stirred to action. There is no anti-war movement while the body count surges ever higher.

So with no opposition, the proponents of war (think John Bolton, think Raytheon, think Boeing, think Big Oil, think Halliburton, etc.) are the only influence on our planning. Therefore, the war in Afghanistan will continue as long as people who have morals remain silent. At this point we cannot say we’re there for the benefit of the Afghani people. They are suffering and our presence may well have increased their suffering. We are there because we have ignored President Eisenhower’s wise admonition — wariness about the aforementioned  military-industrial complex — and that is a big black mark against us as a nation, as I have said before on this blog.

Fighting an unjust war is morally reprehensible. But I think the problem is more amorality than immorality. When we are led to wage war by the powerful interests of the military-industrial complex, we don’t consciously contravene our own morals. We simply ignore moral issues altogether. We act as if we have no morals since they never factor in to discussions about war. Our president’s recent defense of our role in the Yemeni slaughter was that huge arms sales were at stake. This reveals his own moral vacuity and that of his supporters — virtually the entire Republican Party. It is my quixotic dream that at least one Democratic presidential candidate in 2020 will galvanize opposition to the war in Afghanistan and its cost in the unnecessary deaths of Afghans and American soldiers.

5 mins read in General
Stay Connected!
Get my latest blog posts straight to your inbox!
Your information will never be shared