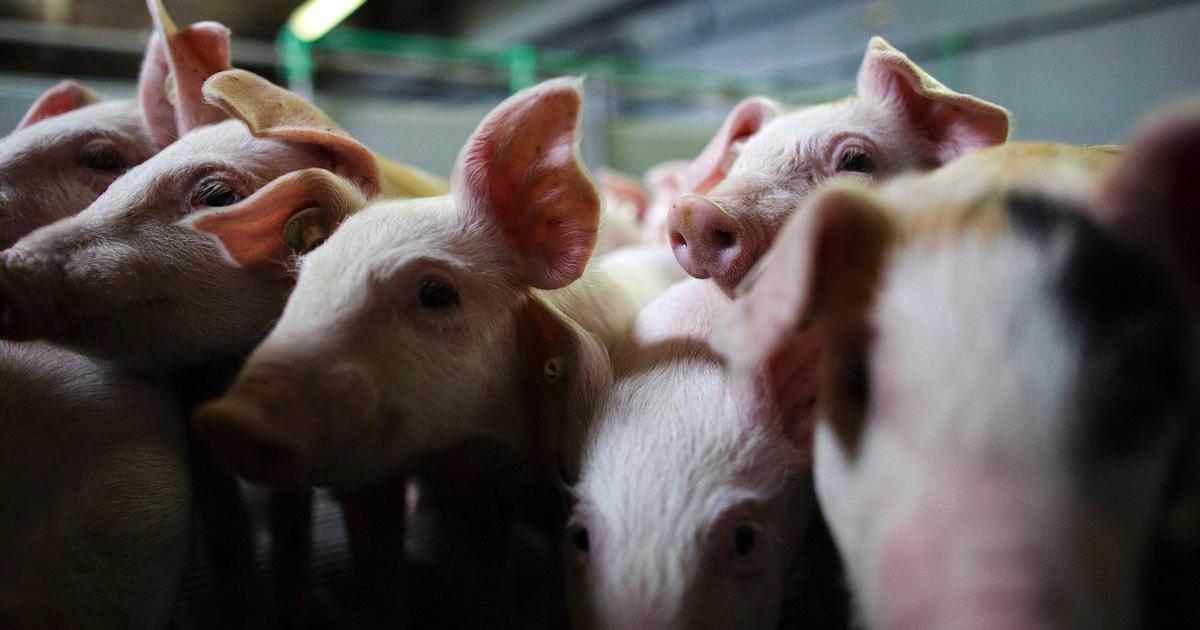 On Oct. 10, I turned to the editorial page of The New York Times and encountered a guest editorial entitled “Pig Farming Doesn’t Have to Be This Cruel.” The writer, Mark Essig, is a swine expert and author of a book with a whimsical title: Lesser Beasts: A Snout-to-Tail History of the Humble Pig.

His Times piece was anything but amusing, though. It disturbed me for a number of reasons. You should read it if you haven’t. Here’s the link.

Most people have at least a vague sense that modern farming is characterized by animal cruelty. But the devil is in the details. One of those details is that pregnant sows are kept in gestation crates that measure  2 feet by 7 feet. There is no bedding. The sows cannot even turn around in the gestation crates. Here is how Mark Essig describes the life of a sow at a factory farm.

Breeding sows are impregnated through artificial insemination, kept in gestation crates during pregnancy, and then moved to slightly larger farrowing crates to give birth. After the piglets are weaned a few weeks later, the sows receive a fresh tube of semen and are returned to a crate, a cycle that continues until they are injured or become infertile. Then they are slaughtered for sausage, generally at age 2 or 3, never having set foot outdoors.

Because California accounts for 13 percent of all US pork consumption, the new law would impact pork producers across the country. Pork producers, represented by their trade group — the National Pork Producers Council — have sued to overturn Proposition 12. The case was argued before the Supreme Court earlier in October.

Here is how Essig frames the issue before the court.

The court, which will hear arguments in the case this week,  must decide whether Prop. 12 violates what is known as the dormant commerce clause, which holds state laws unconstitutional if they place an excessive burden on interstate commerce.

Pork producers will argue that switching to humane breeding methods required by Proposition 12 will be excessively burdensome — read, cut into their profits — thus restraining interstate commerce.

Who would deem 24 square feet to be too much space for a pregnant sow? I think most people are as opposed to torturing animals as I am, but that doesn’t seem to matter. If the choice is between treating animals somewhat more humanely or maintaining the profit margins of the huge corporations who operate factory farms, must we opt for profits over mercy?

Today’s pork industry is nothing like it once was.  It’s dominated by factory farms owned by gigantic corporations. By far the largest is Smithfield, which is owned by the WH Group of China. Every year Smithfield slaughters 18 million pigs worldwide. Over 98 percent of pork is produced at factory farms with more than 5,000 pigs each.

One of my best friends for the past 40-plus years stopped eating meat long ago. He is convinced that people living, say, 50 years from now will look back and be appalled at the way we mistreat, then eat, animals today. I think he’s right; I certainly hope he is. My own wife has shunned pork for the same reasons for quite some time. So why have I continued to eat it?

Is it because I think I’ve already done my part by abstaining from beef due to the coming climate disaster? (Beef production is a prime driver of global warming.) Do I feel that not eating beef is enough? If so, then I guess it means that I’m indifferent to the cruelty inflicted on pigs, chickens, and sheep? How can I deny that? So, I confess I am uncomfortable writing this. What can one do short of becoming a vegetarian?

In my research on pork production I came across the website for Sentient Media, a nonprofit news organization that focuses on farmed animals and our broken food system, among other issues. Click on the link below and you’ll find their article on pork production. You’ll learn all you need to know in a few minutes. Look for the big orange box labeled TAKE ACTION. There the authors provide you with all sorts of help in trying to eat morally.

The choice doesn’t have to be stark. It’s not simply “Go Vegan” or be complicit in animal torture. There are ways short of veganism to be a friend to animals raised for human consumption.

Please take a few minutes to learn how you can help. Or, you can take the plunge and become a vegetarian. Then you’ll never again have to worry about the ill effects of meat consumption and you can virtue shame all your friends!

I have not attempted to discuss the other evils of factory farms, especially pig farms, but they fall into several categories: the environmental disasters wrought by the waste from tens of thousands  of pigs being housed indoors; the sanitary conditions in the plants that can cause the meat produced to be toxic; the working conditions in the plants where 70-plus percent of the employees are black or Hispanic; the difference in quality between the meat produced from stressed/distressed animals and the meat from pasture-raised animals. A cursory survey of the internet articles on these subjects made me swear off buying any pork products from Smithfield, Oscar Mayer, and the other big names in pork.

However, a similarly brief search for humanely raised pork products yielded many alternative sources that specialize in pasture-raised meat, do not use gestation crates of any size, do not use hormones or antibiotics, and champion humane treatment of pigs from birth to slaughter. Many of these purveyors have websites and plenty of photos to illustrate the way their farms are run. So it isn’t hard or overly time consuming to be informed about the meat you are eating. And if anyone who self-identifies as an animal lover can’t go to this much trouble for the noble pig, then they don’t deserve to call themselves animal lovers.